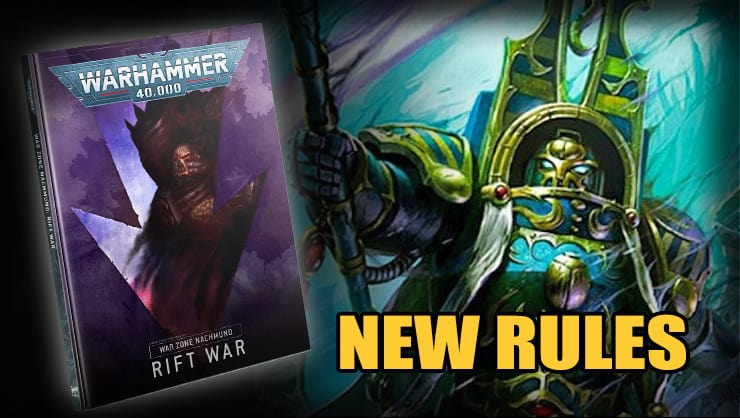 New 40k rules are here for the Thousand Sons as Tzeentch will get new Army of Renown rules in the new War Zone Nachmund Rift War book!

Even though they put the majority of the War Zone books on the Last Chance to Buy list, it looks like they will keep releasing them.

The good news is that these rules also make some sense with the Thousand Sons Combat Patrol and why it has so many Tzaangors in it. Maybe it also shows how far apart from their original lineup of releases is, as the box would have made way more sense with these rules dropping at the same time.

Warhammer Community unveiled the rules for the Army of Renown and the list building restrictions when fielding it. 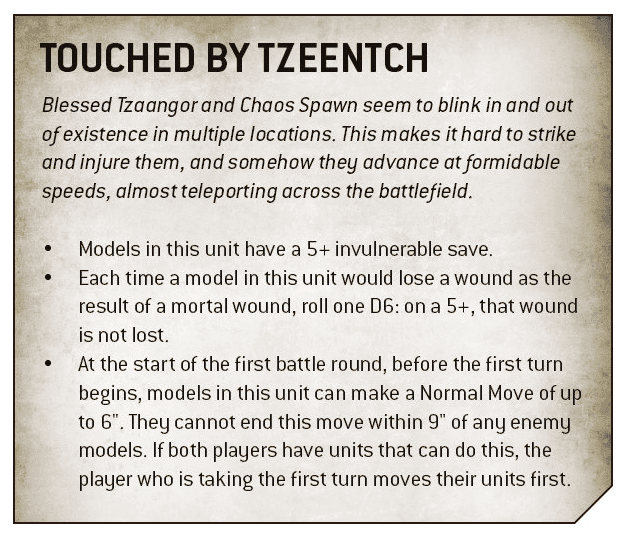 No longer bound by the Mere Servants rule, acolytes of Tzeentch in the 41st Millennium may now take armies comprised of vast flocks of Tzaangor, without the need for Magnus-mandated dusty boys. Such is their mutant savagery that Warpmeld Pacts can’t include VEHICLES, DAEMONS, or CULTISTS, have to use the Discipline of Change, and don’t receive the Brotherhood of Sorcerers ability.

In exchange, units of TZAANGOR – as well as CHAOS SPAWN and your psychic leaders – receive the Touched by Tzeentch rule. Phasing in and out of reality as they bound towards their foes, they receive a 5+ invulnerable save along with the ability to shrug off mortal wounds on a roll of a 5+.

This makes them much tougher and with the free 6″ move, you can pull off some interesting redeployment or just surge straight forward! However, not taking vehicles, Daemons, or Cultists is a pretty big drawback for tougher Tzaangors and Spawns. 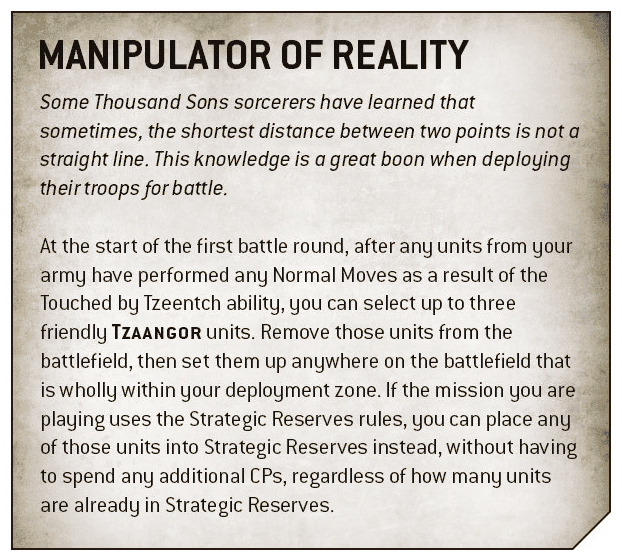 Avian appreciators rest assured, there’s even more in store for your feathered friends. Warpmeld Pacts have access to the Manipulator of Reality Warlord Trait, allowing your sorcerous leader to navigate the roiling whorls of the empyrean, and shuffle up to three friendly Tzaangor after deployment.

Even more shenanigans for moving your army around. This is pretty interesting but we’ll have to see if all that extra movement is really worth the drawbacks. 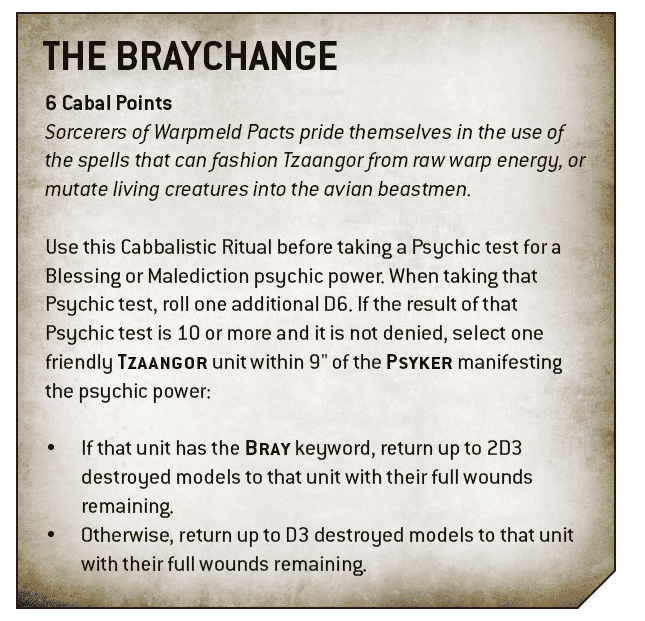 Not only do you get to roll an extra D6 on your Psychic test for a Blessing or Malediction, if you roll a 10 or more you can shape fresh mutants from the ether. Buff a nearby unit with Glamour of Tzeentch, and bolster them further by bringing back 2D3 Tzaangors – or D3 Tzaangor Enlightened – to keep the fight going. Adapt and overcome! Then adapt some more. Tzeentch likes that.

This is quite strong and could really keep your units moving forward, especially when combined with the 5++. 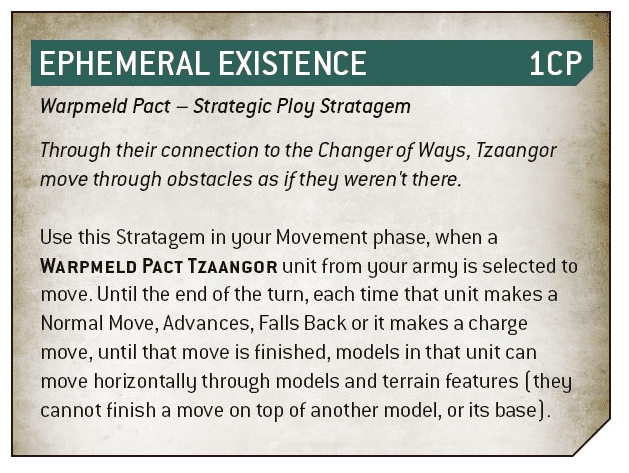 This kind of occult trickery can turn a battlefield packed with immersive terrain into a playground for your beaked bad boys. It all culminates in a full army of shifty, hard-to-kill Tzaangor that swarm back to the battlefield like a flock of angry magpies, led by a coven of cabbalistic sorcerers.

With all the movement buffs and such this army is getting, it really fits the theme but won’t be super easy to take advantage of unless you’re really planning on what each unit is going to do!

Are you excited about the new Army of Renown 40k rules for Tzeentch and the Thousand Sons? Do you think the benefits are worth the drawbacks? 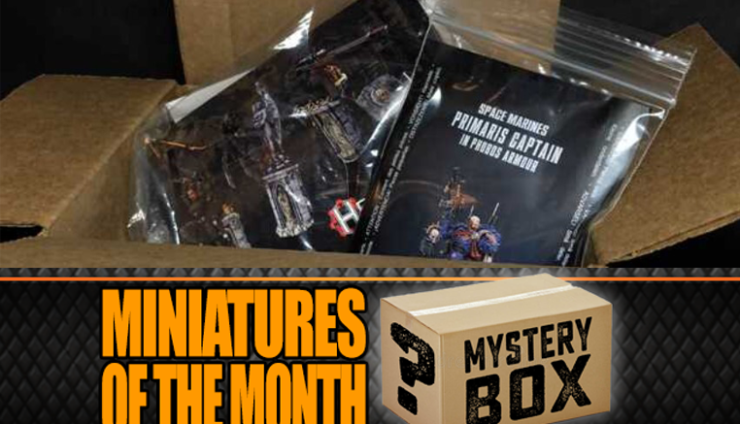 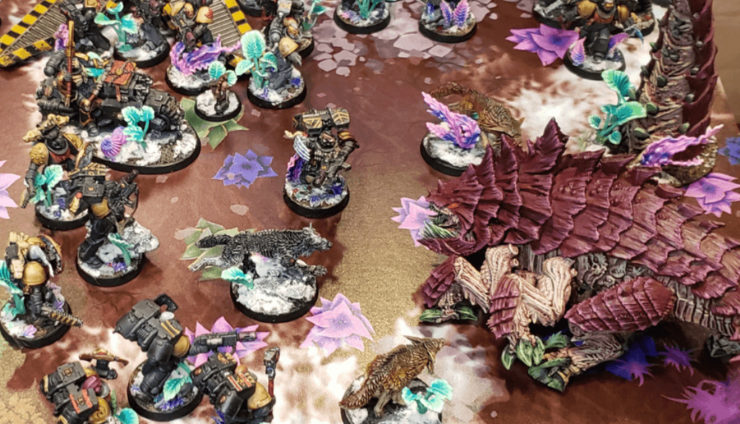 NEXT ARTICLE
On the Hunt for Big Bugs: Armies on Parade »
If you buy something from a link on our site, we may earn a commision. See our ethics statement.