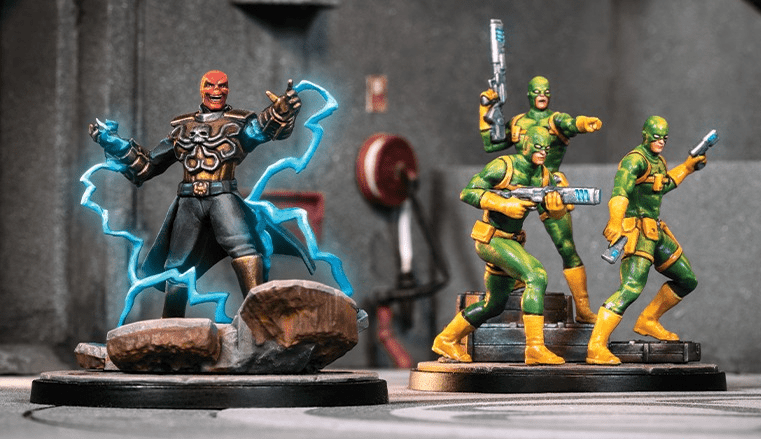 AMG has revealed the Red Skull and Hydra Troops Marvel Crisis Protocol Tactics Cards and rules; here is the latest!

The pack has hit pre-order (will be shipped on 10/14/2022), so it’s good to know what he can do before you buy! The cards come from AMG’s Twitter. First, check out the new pack we saw, then jump into the rules! 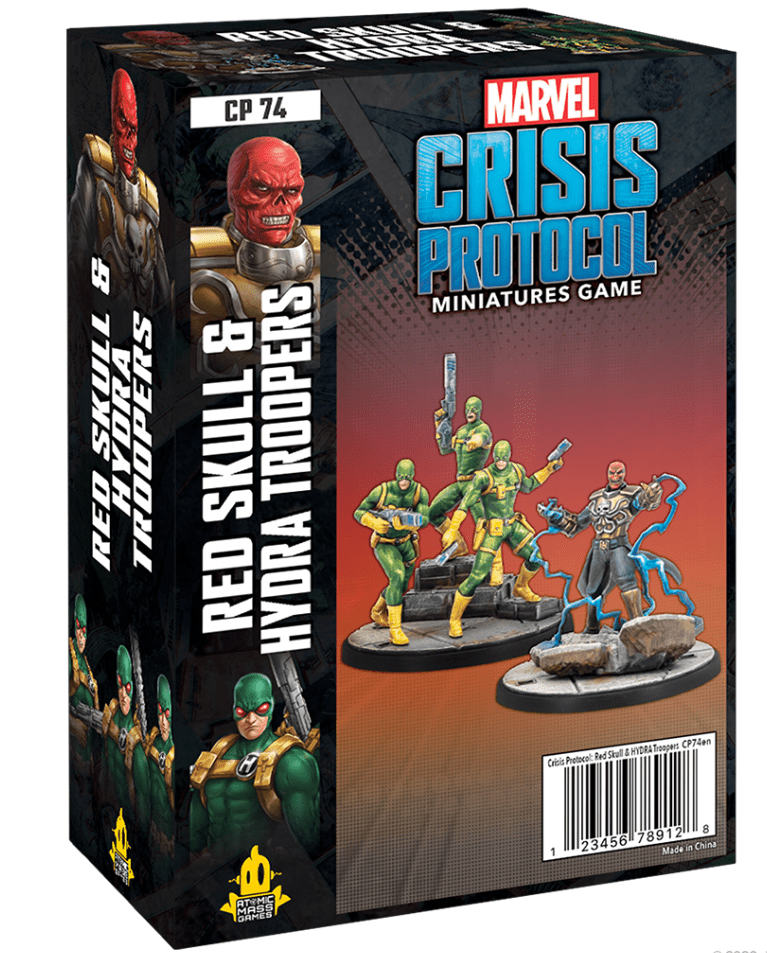 These should be a fun addition to the game with some cool rules.  If you want to see all the recent expansions, check those out here!

The Red Skull leads HYDRA in its quest for world domination in this new pack for Marvel: Crisis Protocol! Johann Schmidt is a conniving villain whose evil deeds span generations. During this time, he has transformed HYDRA into a globe-spanning terrorist organization that cannot ever truly be destroyed, for “If a head is cut off, two more shall take its place.” 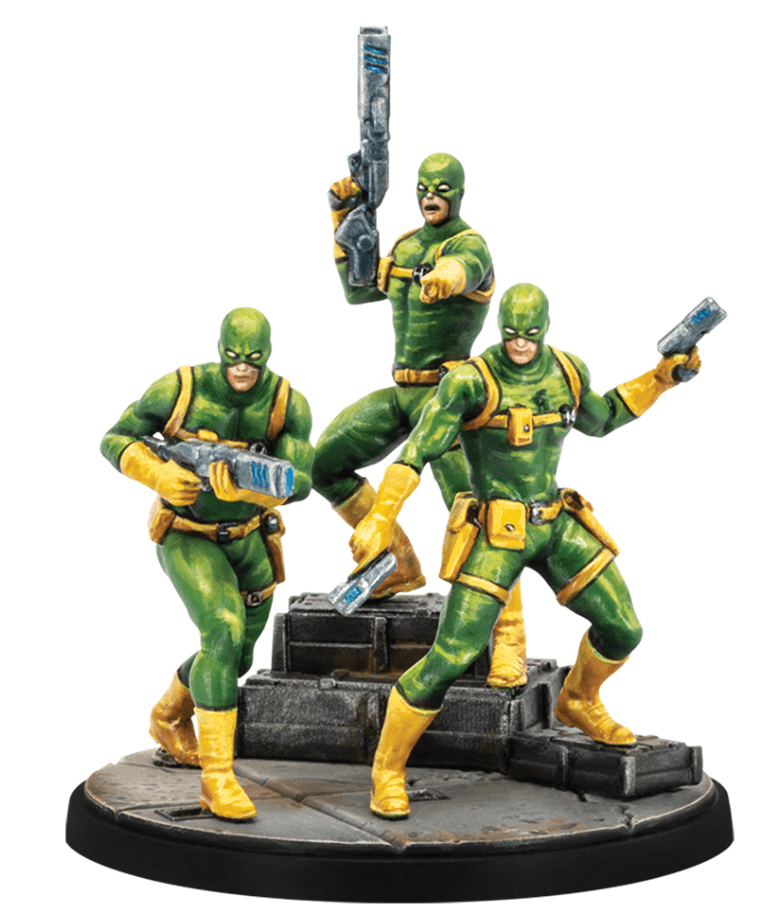 The new version of the Red Skull in this pack introduces the HYDRA Affiliation to Marvel: Crisis Protocol while leading a group of HYDRA Troops ready to do his bidding. In addition to these miniatures and their abilities, this pack further enhances the HYDRA Affiliation with seven Team Tactic cards that give Red Skull and his subordinates even more ways to further their plans for world domination. 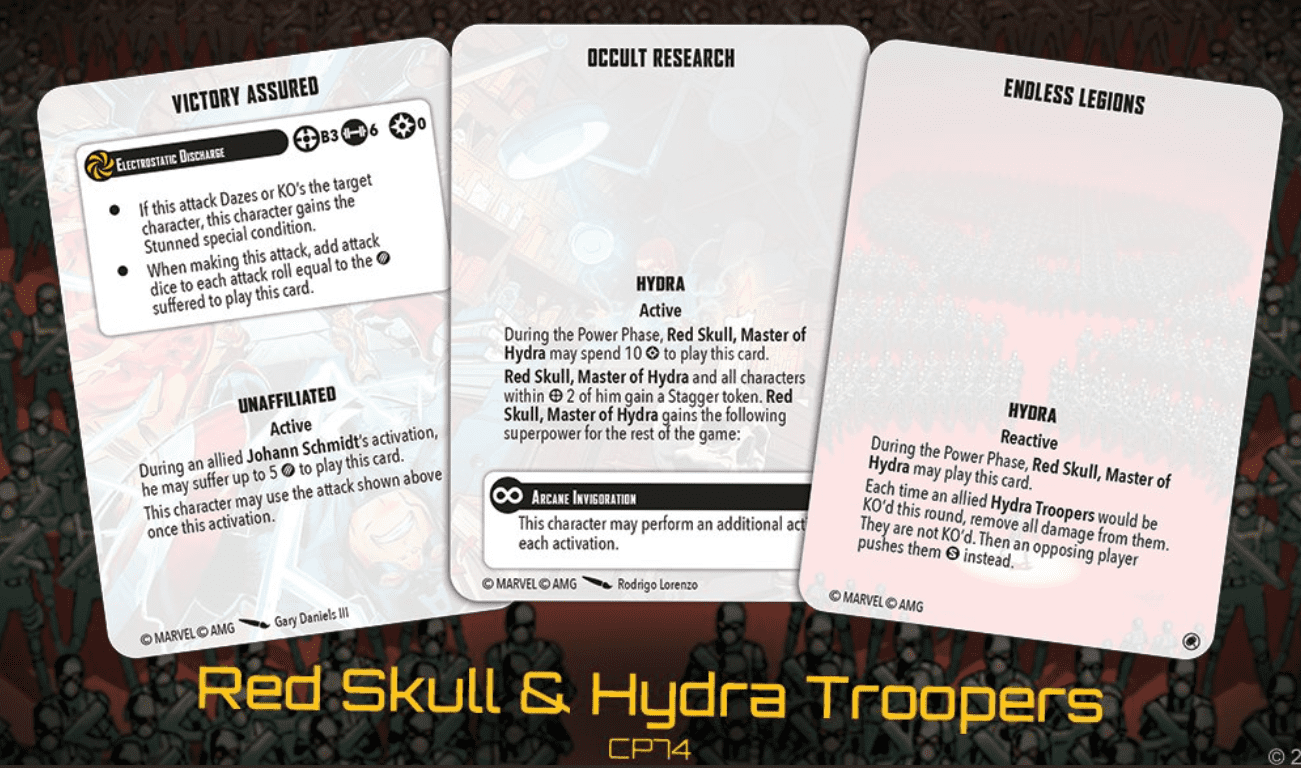 So, Occult Research is interesting as it will take a great turn or two to get the power for it, then he’s actually staggered by the attack, but if you can sprint him in and stagger like three of your enemies, it could be strong because after it goes off, he gets an extra activation.

Endless Legions is cool as it can just let you keep bringing back the Grunts, so honestly makes them much stronger. 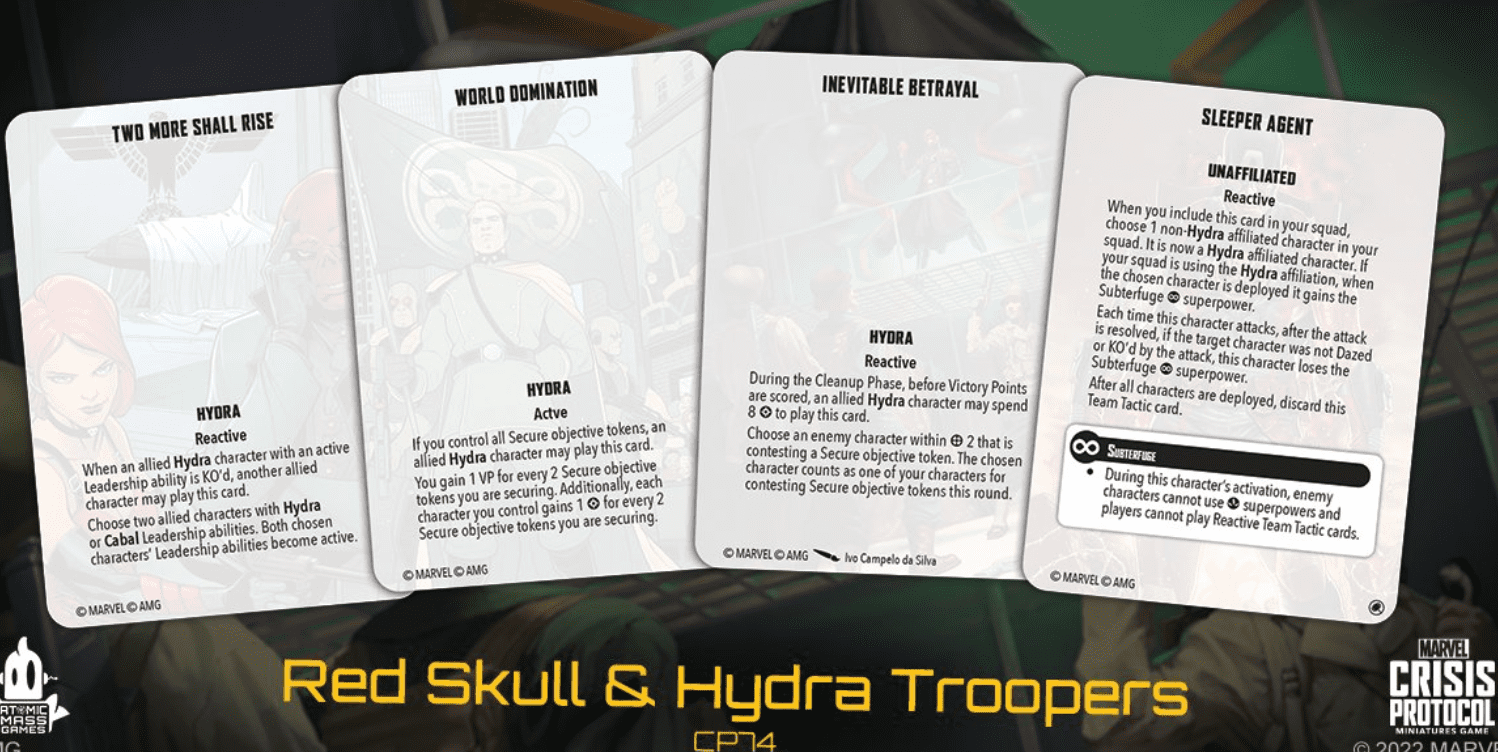 Two More Shall Rise is cool (and flavorful as more heads sprout from one), but the leadership abilities of the two factions don’t gel too well together. Still, it’s quite interesting.

World Domination seems a little strange as of right now, but it really seems to work in very specific situations. Inevitable Betrayal could really make World Domination pretty awesome, but eight power from one character is quite the high tax.

Maybe they could raise the cost a little but let it be shared. Right now, it’s really expensive for one character to play.

Overall though, some very flavorful cards, and all feel like Hydra for sure!

Here are the character card rules previews in case you missed them from earlier: 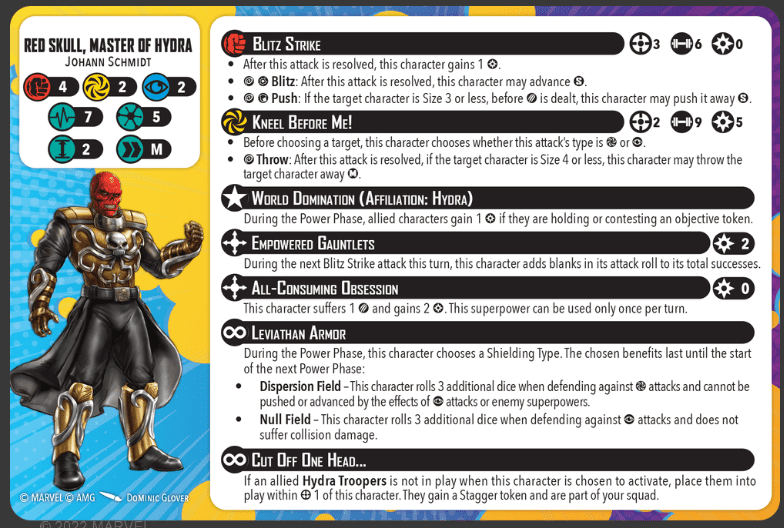 As the Master of Hydra, Red Skull leads a vicious Blitz Strike against his enemies, a rapid physical attack that hits at Strength 6 and can force his target back while Red Skull follows up for another attack. When he has an opponent at his mercy, Red Skull commands his enemies with Kneel Before Me! Though it costs 5 Power to use, this devastating Strength 9 attack is your choice of Energy or Mystic and can throw characters as large as Size 4 a Medium distance away!

New leadership for the Hydra affiliation called, appropriately enough, World Domination. Skull rewards his underlings for following his orders to the letter, so allied characters gain 1 Power during the Power Phase if they are holding or contesting objectives during a crisis.

Blitz Strike has a lot of options, and can shoot him further into the fray or get enemies out of it! World Domination is really interesting, and the more you contest or control objective markers (which you want to do anyway), your entire force will get stronger! 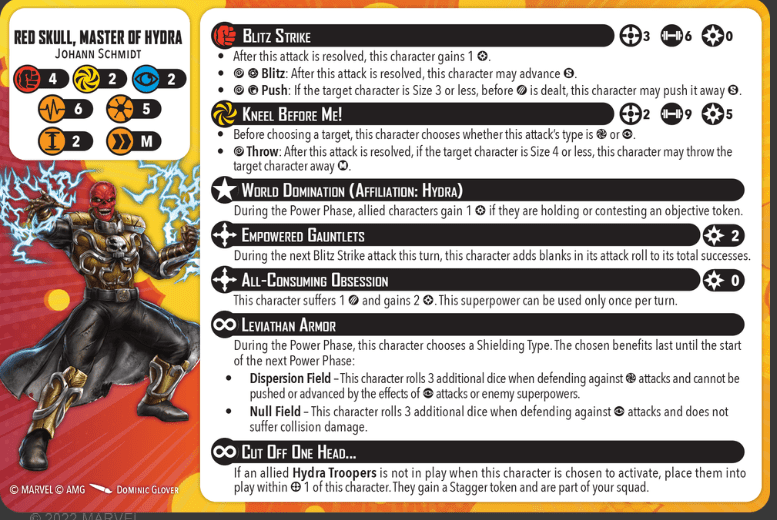 While his allies worry about objectives, Red Skull himself can go toe to toe with the heaviest hitters on the field. Outfitted in the supreme armor of Hydra, Skull can rely on his Empowered Gauntlets to hit hard. Costing 2 Power, this active power lets him add blank results to his next Blitz Strike attack roll. If he lacks the Power to use it, Skull can rely on his All-Consuming Obsession, which lets him trade 1 damage for 2 Power once per turn.

You might think being stuck in against meddlesome heroes might be a problem for Red Skull, but his Leviathan Armor offers him superior protection against many attacks. This innate power lets him choose a type of shielding during each Power Phase. He can activate a Dispersion Field, which gives him three extra dice when defending against energy attacks and prevents him from being pushed or advanced by the enemy, or he can rely on a Null Field to deaden the power of Mystic attacks and render him immune to collisions!

Empowered Gauntlets can make his Blitz Attacks hit super hard, and then you add in all-consuming obsession; he has all kinds of power. Then, Leviathan Armor gives him all kinds of defensive abilities and hopefully keeps him alive to use those strong attacks!

Lastly, he can pop his grunts up anywhere he is, which just makes sense! 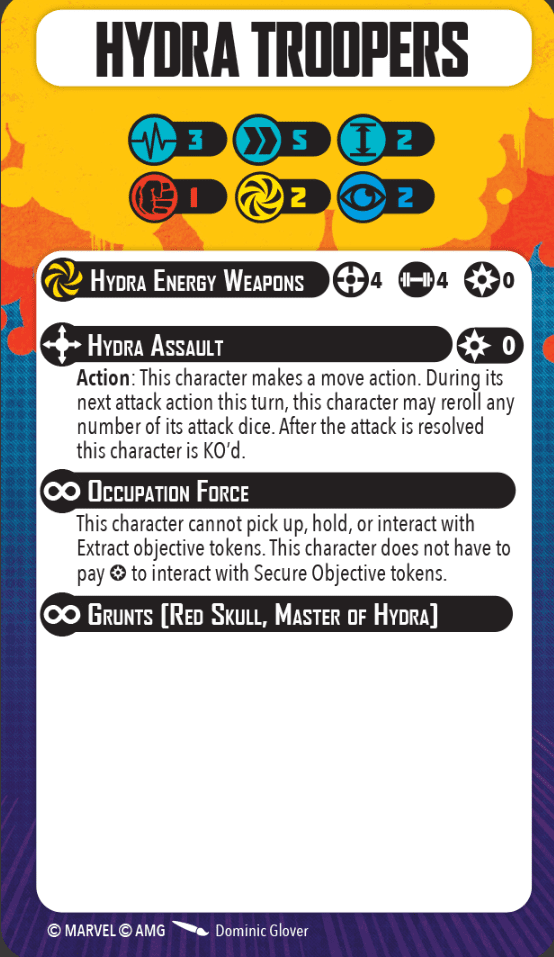 Red Skull is a terrifying foe on his own… but he isn’t alone on the battlefield. The Master of Hydra brings a squad of Hydra Troopers into battle, which he can reinforce with the Cut Off One Head… innate power. Hydra Troopers are grunts outfitted with energy weapons who secure objectives in the field and are willing to lay down their lives for the cause of the Red Skull! This is evident when you look at their Hydra Assault power, which lets them rush in and lay down fire with their energy weapons, rerolling any number of attack dice—and being KO’ed after the attack. Those that don’t go rushing into battle lock down any objectives on the battlefield, thanks to the Occupation Force innate power. While they aren’t able to interact with Extract objectives, the ability to hold Secure objectives without paying power makes them an efficient tool for controlling those objectives.

You can pop them up right next to Red Skull and have them secure an objective token for you. Then, if you just want to throw them forward with their energy weapons, they can re-roll all attacks, but they do get KO’d after the attack, but who cares? They are grunts!

Do you like the new tactics cards for Red Skull in Marvel Crisis Protocol? Will you be picking the mini up? 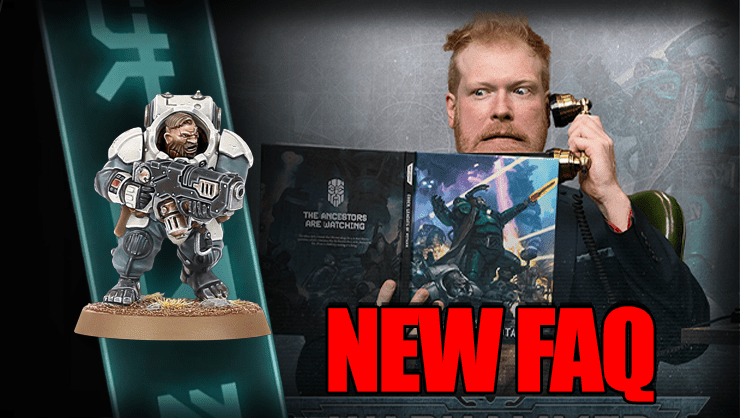 NEXT ARTICLE
New Forge World Horus Heresy Upgrade Kits »
If you buy something from a link on our site, we may earn a commision. See our ethics statement.