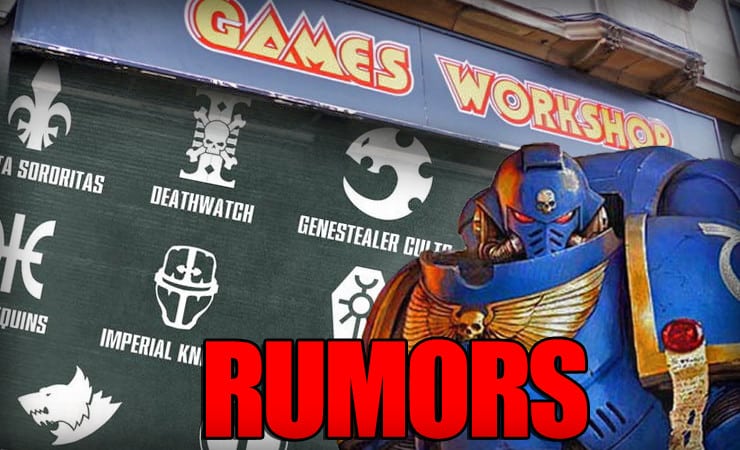 More Eldar leaks from their upcoming 40k Eldar book are here along with the rumored order of new codex releases and SPACE MARINES 2.0!

Just like anything that is a rumor, take this with as much salt as you need. We recently saw a ton of Eldar leaks (from someone calling themselves Moarleaks who looks to be an obvious GW mouthpiece), and now there are more for the order of new Codex book releases, Space Marines 2.0, and even Necrons?

While they look pretty decent, there is always a chance someone just made these datasheets up and then blurred them in Photoshop. Some are also a little hard to read, but if you get in there, you can get the info you need.

The first set of leaks come from the Aeldari Discord and show what appears to be Warlock rules, army-wide rules, objectives, psychic powers, and more. So if you’re wondering what the army might be able to do, these will give you a taste.

Let’s first check out the new Eldritch Omens box, then get into all the rumors. 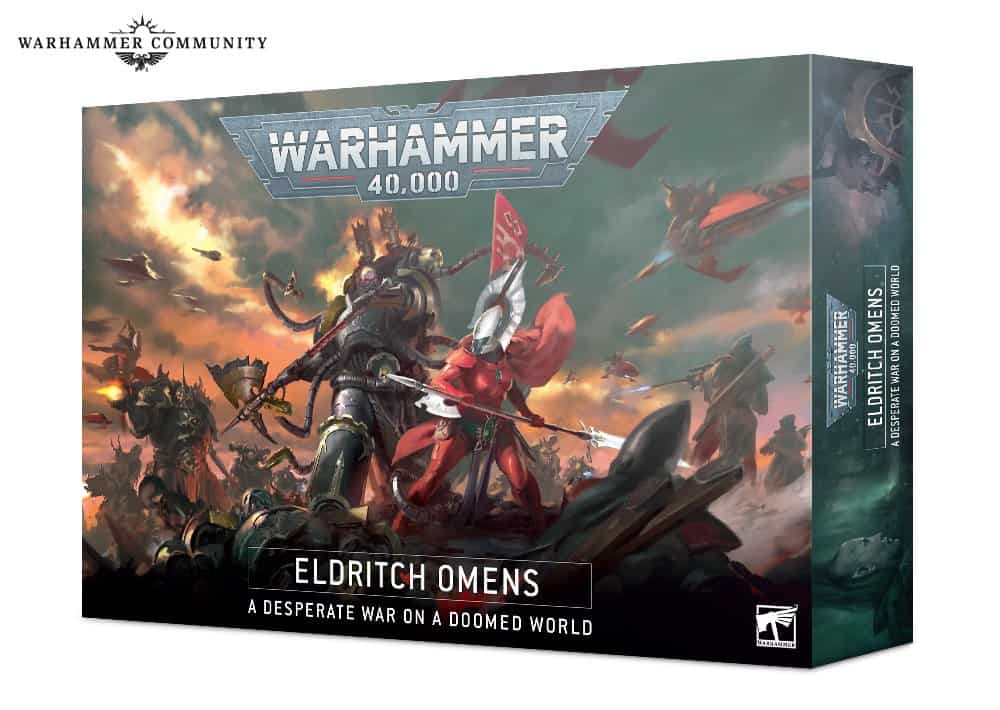 If you’re a fan of Warhammer Age of Sigmar, we will have a major reveal coming on Monday, pitting two allies of Order against one another in a battle of the elements.

This battlebox contains 16 miniatures, a whopping 15 of which are all new. The 16th is a mighty, smoke-belching Forgefiend – the forces of Chaos can never have too many daemon engines. You also get a 32-page Eldritch Omens booklet that outlines the narrative of the battle for Daethe in the war-torn Nachmund sector.

Down from 25 miniatures in the Shadow Throne box set (which sold for $170), Eldritch Storm included 16 miniatures which are all new except the Maulerfiend! 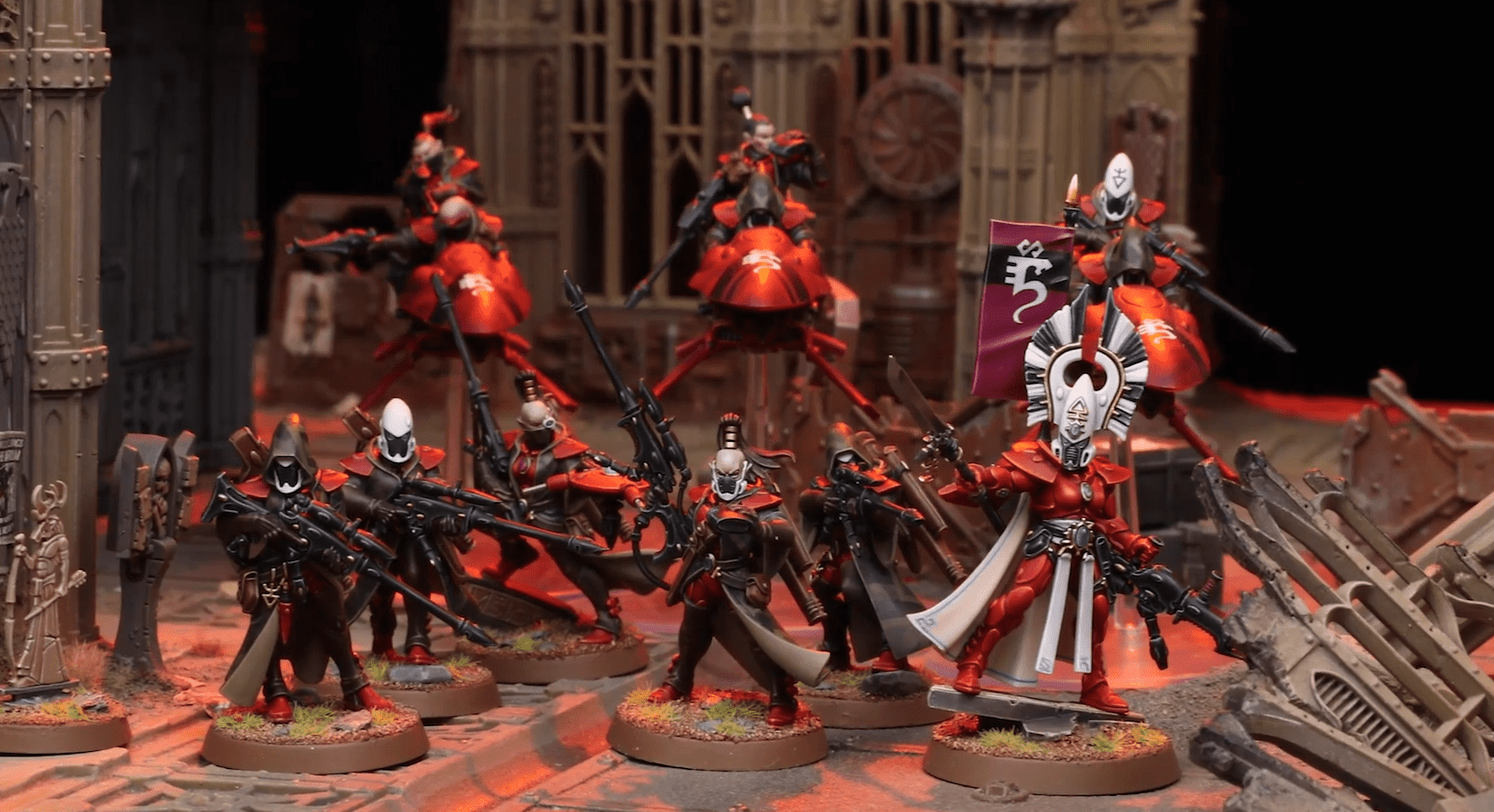 The Asuryani get nine all-new miniatures comprising Autarch Ghaelyn’s Saim-Hann force, including the Autarch herself.

Perhaps the more highly anticipated half of this box set are all the new Eldar Aeldari Craftworlds miniatures, but that Warpsmith for Chaos is looking hot too!

Before we get into these new Eldar Codex rules leaks, again, some of these could be fake, but since they are rumors we can’t know for sure 100% either way. 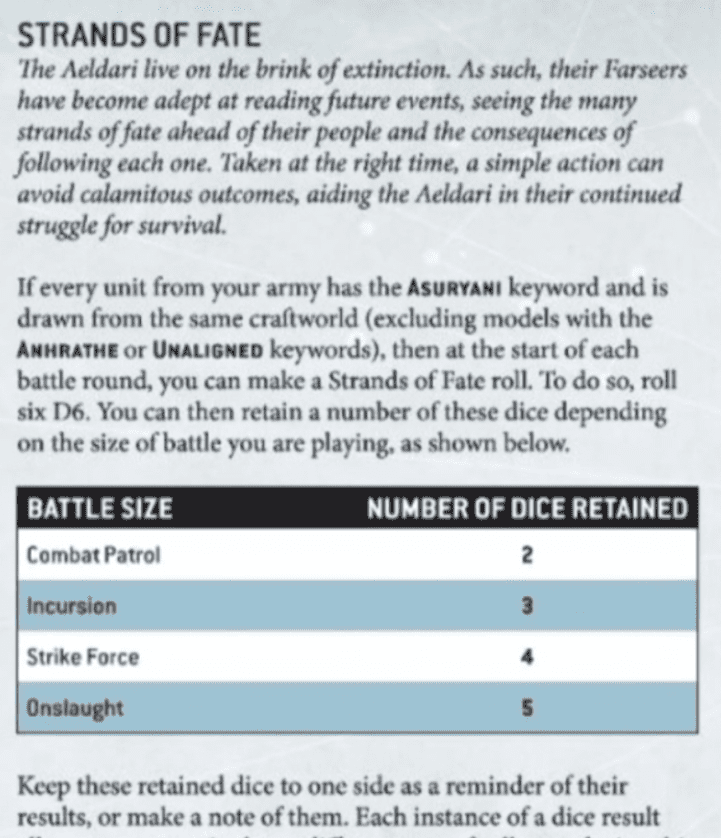 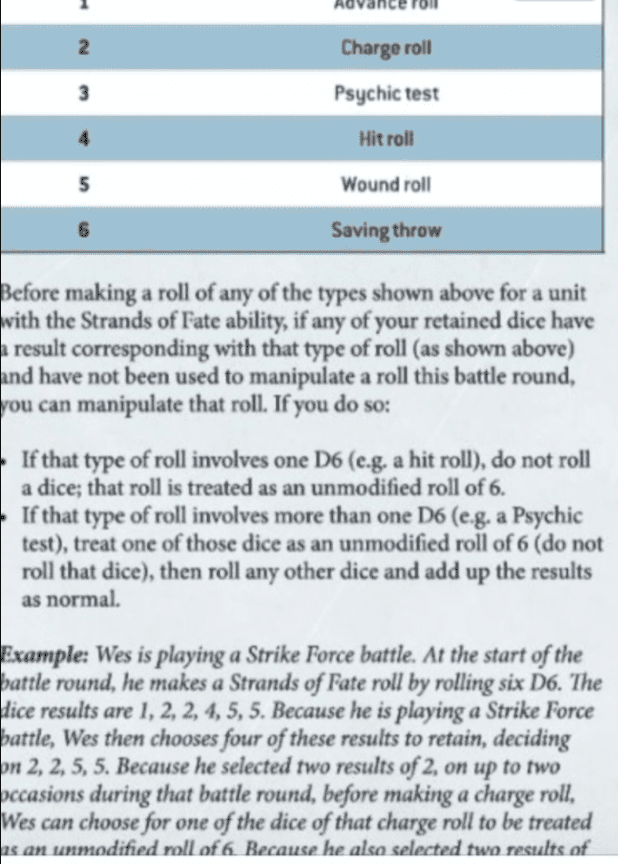 We heard rumors for a while of a “miracle dice” type mechanic, so this is an interesting take on it. Instead of being able to keep the number rolled on the dice, you actually get them for specific phases and they seem to always count as 6’s.

It also looks like you can keep more than one of each roll, meaning you can bank up for those really important dice rolls later in the game. 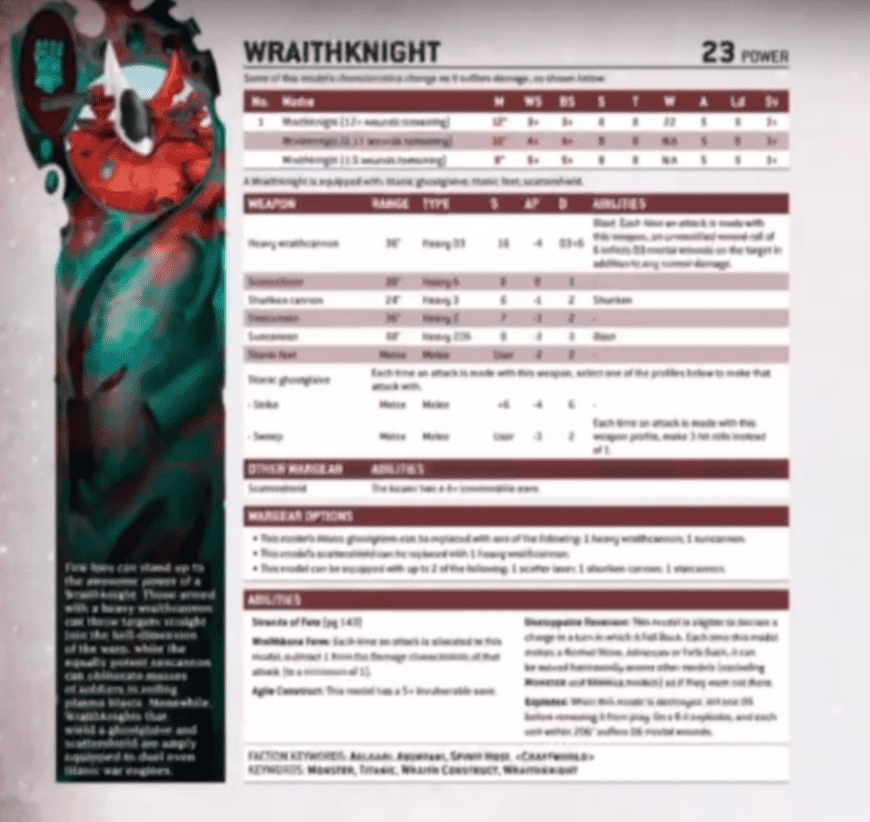 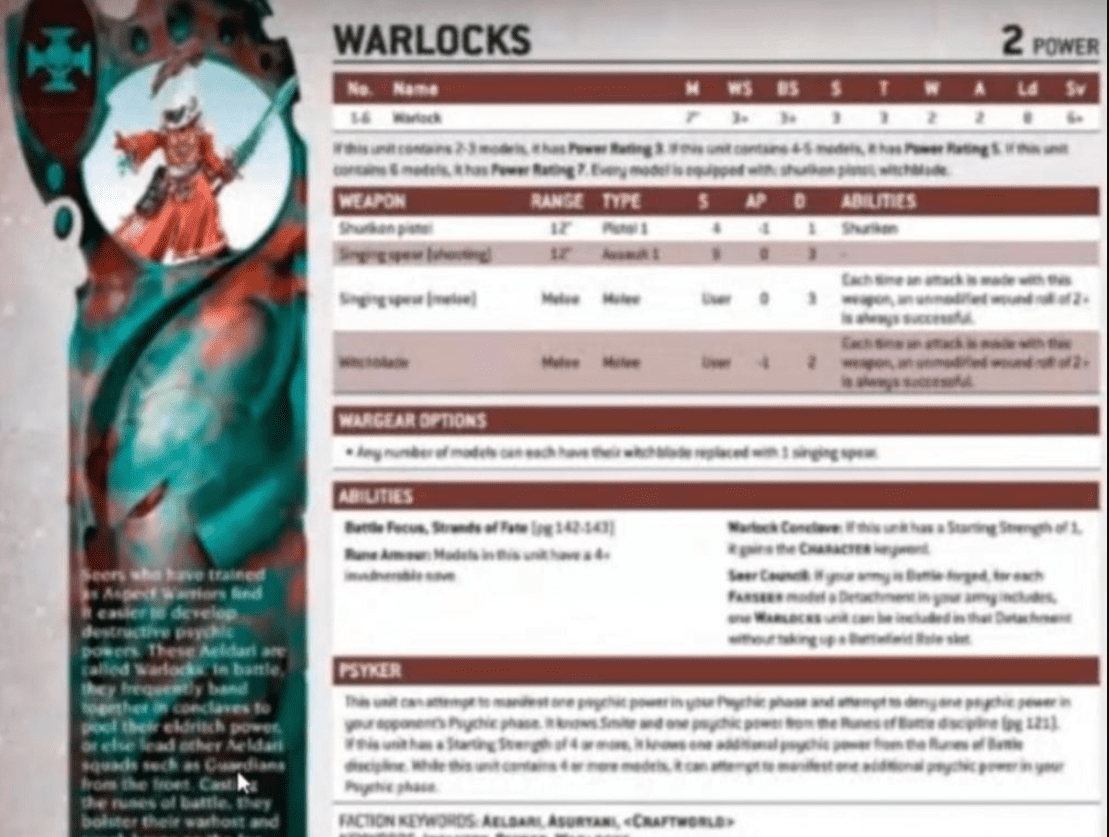 If this is right it looks like the new Warlocks rules datasheet will be 2 wounds and be able to have a single power. Then it looks like for every Farseer in your army you can take one of these without taking up an army slot. Lastly, we see a 4+ Invuln save here as well.

This one is the hardest to read, so we’re not going to take too many guesses. However, the Harlequins all look like they will have a 4+ invuln, can do a similar thing with ignoring cover, and will be reducing the enemy’s hit roll in combat. 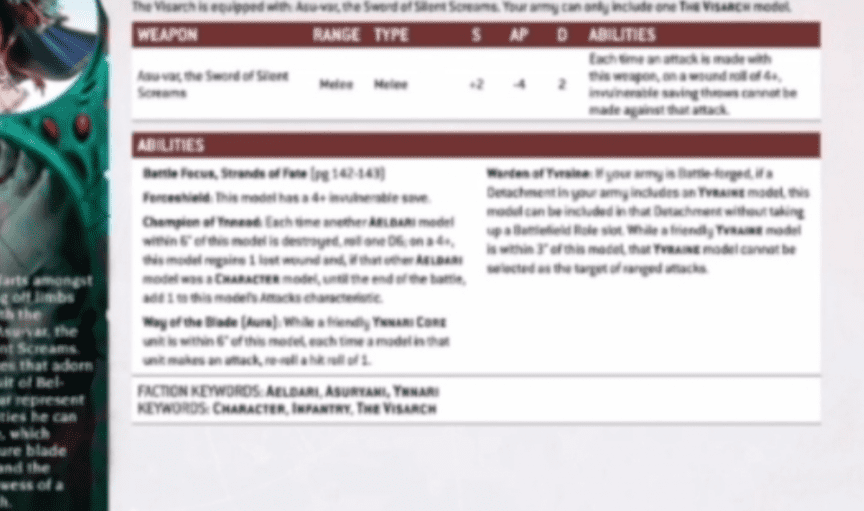 First, it looks like you can return a model destroyed within 6 inches of this to life with one wound on a 4+. That could be super insane when you think about it says just Aeldari, not core models. Then, if it’s a character, they get an extra attack for the rest of the game. Then, you won’t be able to shoot Yvraine as long as a model is within 3 inches.

The D-Cannon can target units that are not in LoS, then on top of that, the weapon does a mortal on every wound roll of a 6. Plus, the strength and damage overall are super high. 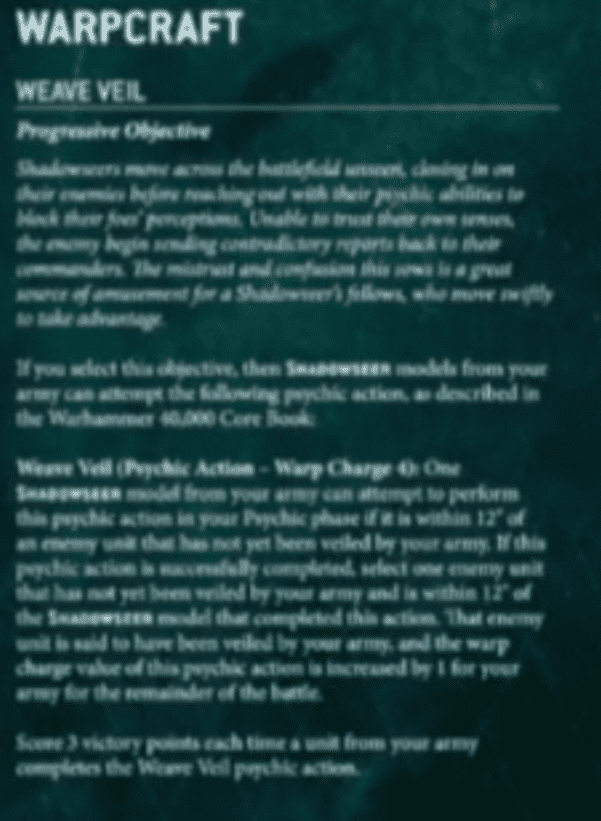 This one is worded very strangely, so there is a chance this is fake, but we can’t know for sure. However, getting points for getting off psychic powers is never a bad thing! 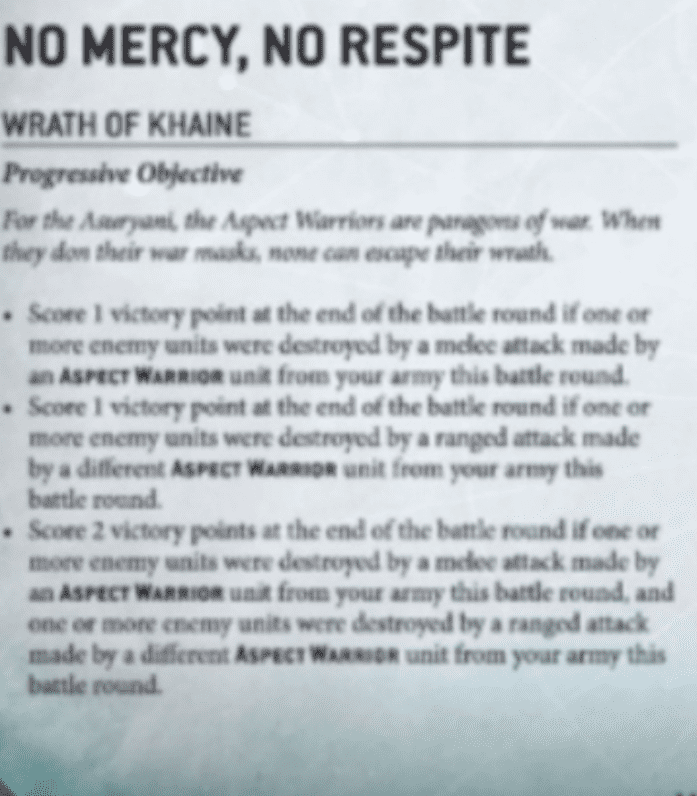 This is an interesting secondary objective for the Eldar because you want to be destroying enemy units anyway! Then it goes with the theme of both melee and shooting-focused Aspect Warriors. If you get all three you’ll get 4 points which aren’t too bad but might be hard to do both in one turn.

The latest and greatest from Moarleaks has a blurry image of a Troupe Master that is framed in what may be Eldar codex borders.  Then there are a ton of rumors for everything Aeldari, and even some Space Marines 2.0 rumors as well: 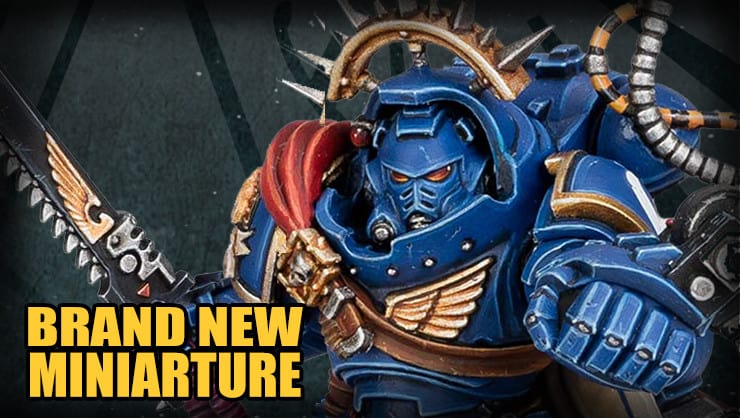 One thing to mention here is that Tau was slated as “next” and there are rumors even saying it will hit store shelves as early as Feb 5th, potentially making another two codex release month and the first for Xenos only releases so far.

It would also appear that Necrons are done, for now, new release-wise… 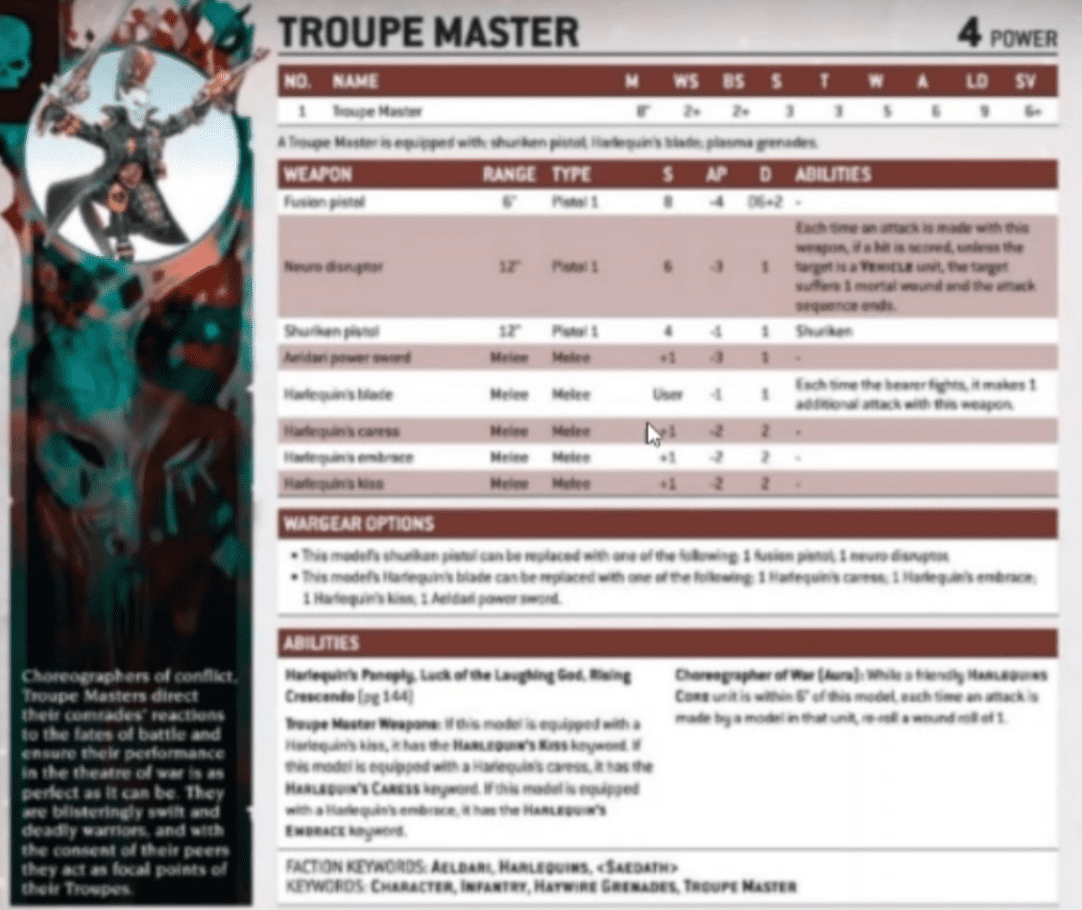 Once again it looks like the potato cam has struck again. Pretty convenient how these crappy quality images always come out when something big is getting released, only to be followed up with a cheeky new post on Warhammer Community about the same info. It’s almost like someone planned it…

Overall these rumors seem to line up with other sets out there, along with the official GW reveals and previews thus far…  Here’s all the latest on the upcoming rules updates and points changes for Warhammer 40k.

What do you think about these new Eldar Codex rules rumors and leaks? 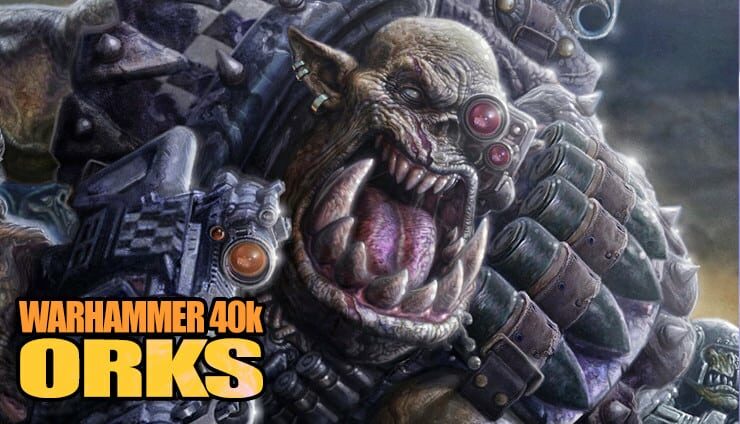 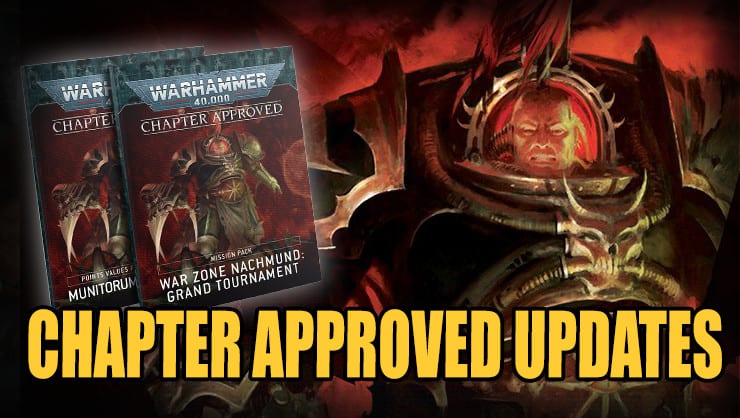 NEXT ARTICLE
GW Reveals 40k Chapter Approved Points Changes »
If you buy something from a link on our site, we may earn a commision. See our ethics statement.