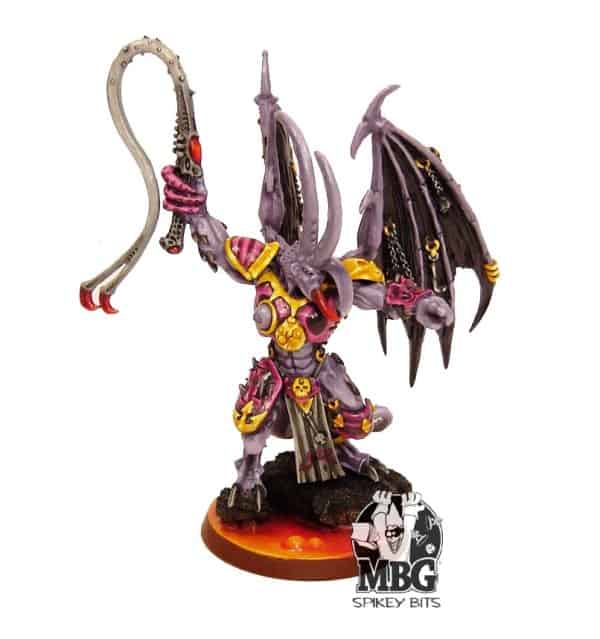 Awhile ago during the scary days of Lash of Slaanesh, I set about making a sweet Daemon Prince model to lead my chaotic forces into battle.

What I thought would be just a simple conversion ended up turning into something more; Lor’Maxxim Lash Prince of Slaanesh.

To make my Lash Prince I used the classic Bel’kor model from Chaos Fantasy, and sculpted on power armor, a breast, and of course the Lash itself. And if that was not enough, I also added a custom lava base with some source highlighting.

Here’s a rough guide on how I did it. 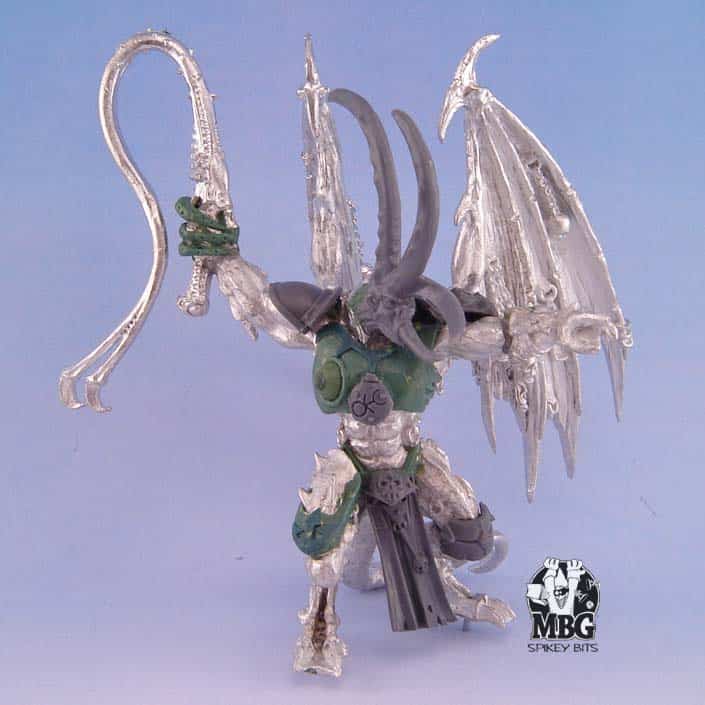 I started out with the Bel’kor model. I really liked the pose and the overall dimensions of the figure, so he made a great base for this project.  Then I added the most Slaaneshi looking head I could find, which ended up being the one from the spawn box.  I had to file down the neck, and putty up a new one for the head to fit on, but I think it ended up looking pretty natural.  Don’t forget the biggest pitfall of modeling heads; make sure the head follows the action suggested by the pose of the body. I can’t tell you how many Space Marines I’ve seen looking back and away from where their bolter is pointing, lol. 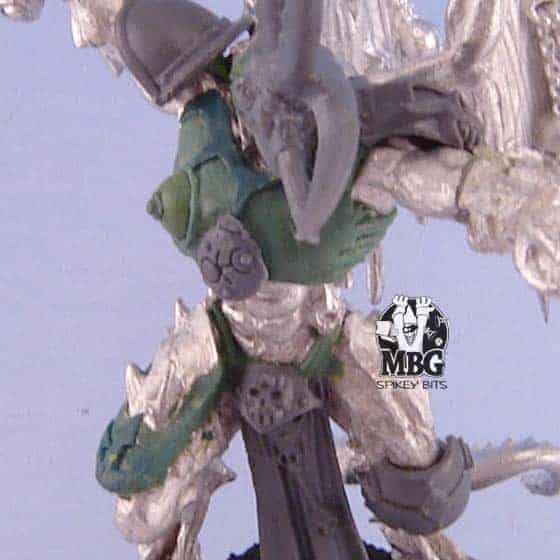 Since this was going to be a 40k model, I really wanted it to have some resemblance or remains of power armor from it’s past life still visible on the model. So I sculpted up the chest armor and breast, and added some Marauder Shoulder Pads to accent the chest and leg.  I also added the clasp and tabard from the Terminator Lord onto the waist. I waited for the putty to dry and then went back and sculpted the chaos spikey trim onto the armor, and the tabard rope around his waist.  Last but not least I sculpted a small ring of trim around the breast, and the nipple itself. 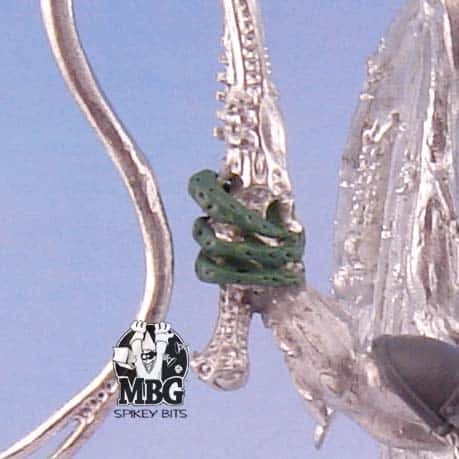 Next I puttied up some tentacles holding the Lash itself.  I figured you really couldn’t have a proper Slaaneshi model unless you gave him a booby and a tentacle, so there you go I think I have met all preconceived criteria.
Plus the tentacles covered up the fact the Lash, from the Hive Tyrant, is on the wrong hand. It was just the only bit I liked for the project- I didn’t care if it was from the wrong hand lol. 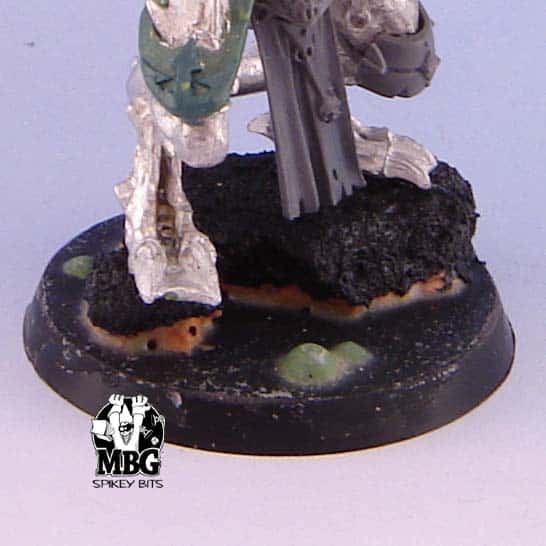 Now it was time for the base, and I was ready. I had seen a great article by Lemmingspawn on DakkaDakka with some great homemade lava bases, so I thought I’d give it a shot. It ended up being pretty easy to do. I just make the actual “land” out of cork. Then I rolled up a few green stuff balls of various diameters. Once they dried I cut them in half to make the base for the lava “bubbles”.  Once I had them glued down to the base in various spots, I added 5-10 washes of wood glue.  What this did was give the bubbles a rounded fillet with the base that made them genuinely look like a liquid bubble. Plus it did the same thing for the land mass by simulating lava splashes on it.  Last but not least I added some Vallejo Black Lava Paste (ironic?) to the rock to give it the texture I needed.

So now it was time to paint my creation in traditional Slaaneshi colors; supple skin, and bright bold armor.

I used a mix of Hormagaunt Purple / Astronomicon Grey for the skin spread out over about six highlights. Then I washed the skin with thin washes of Leviathan Purple. 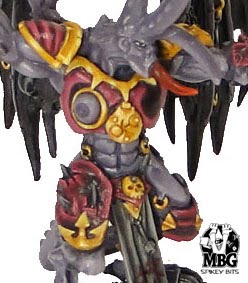 The armor itself was mixes of Foundry’s Shadow Pink Triad, and the trim was done in NMM using Scrofulous Brown highlighted up with Golden Yellow, and then finally some Skull White. I then washed it a couple times with watered down Gryphonne Sepia to get the cracks. After that I went back and painted satin varnish onto the armor plates to make them gleam. 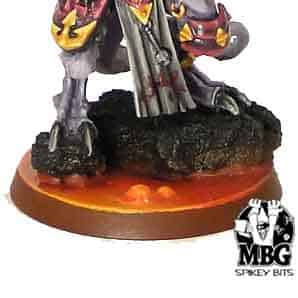 Next I painted the lava rocks on the base with a quick drybrush of Fortress Grey. Nothing fancy just needed some color. With the lava detail I again referred to Lemmingspawn’s post, and used orange up though yellow and added just a smidgen of white to the mix at the end. The key is to keep the paint thin almost like a wash, but kinda the consistency of milk with you are doing this. It takes a lot of coats, but ends up looking pretty good I think. Then I hit it with some gloss varnish to make it shiny.

Here is the final product from various angles. What do you think, does he represent Lord Slaanesh well? 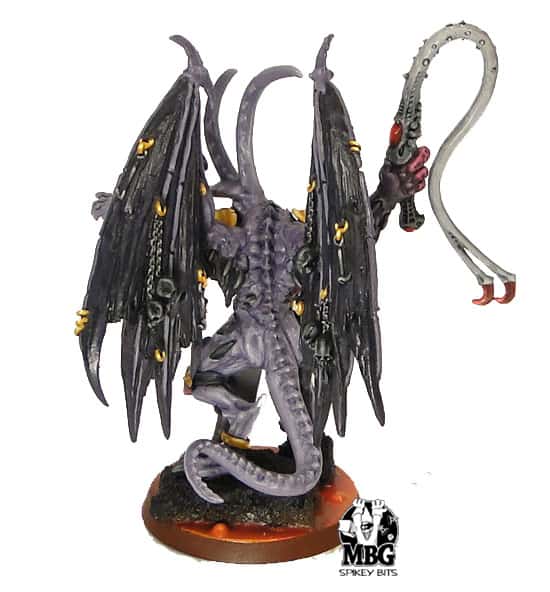 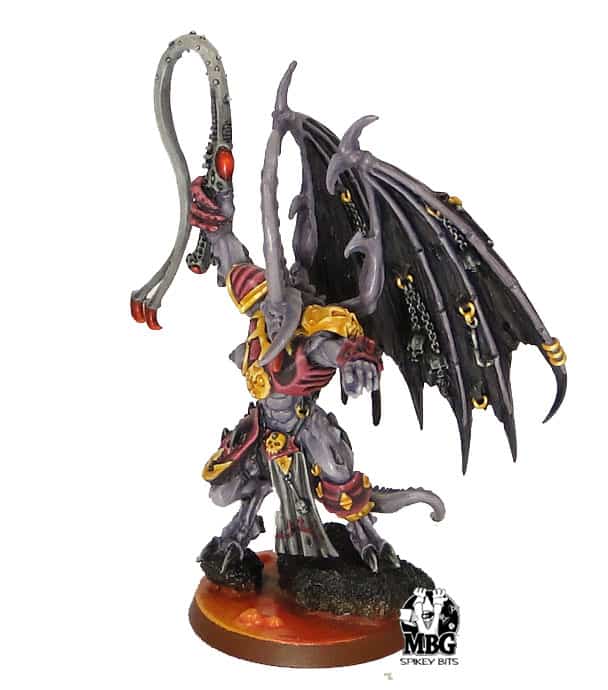 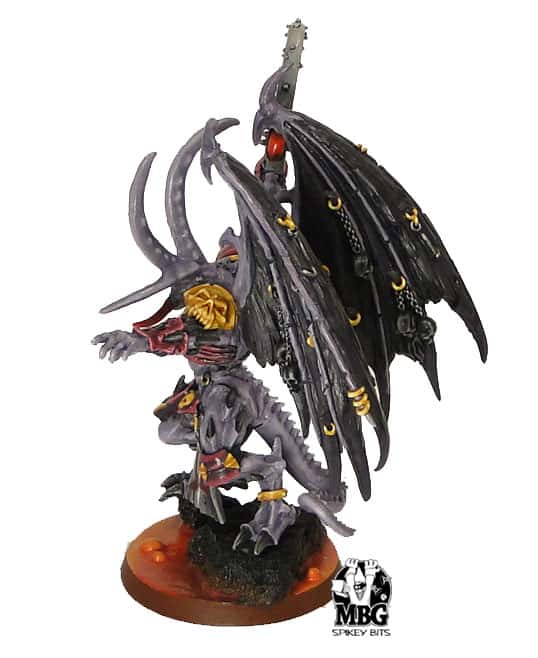 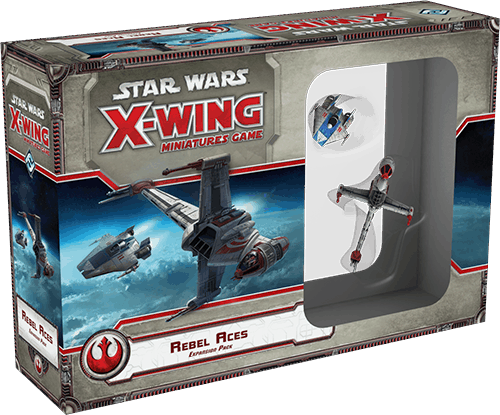 NEXT ARTICLE
X-Wing Rebel Aces are HERE! »
If you buy something from a link on our site, we may earn a commision. See our ethics statement.