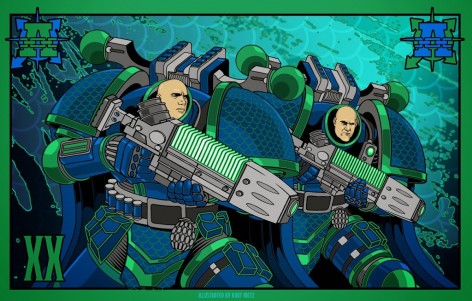 I am Alpharius? Initiates of the Hydra, today I am going to run through the Legion specific wargear and units for the Alpha Legion in 30k.

Today I’m going to go through the rules of Autilon Skorr which are FREE here! Which is always nice. However it must be noted that his rules are also in the lastest Horus Heresy Book:6 as well. I don’t have it myself so I am unsure if his rules have been changed in an drastic way.

Autilon has some pretty cool background, responsible for bringing many worlds into compliance before the outbreak of the Heresy earning a place on the Crusade’s roll of honour no less than 7 times. He is not a physically imposing character to lead your army but he unlocks a new type of consul and he has some quite frankly amazing special rules when taking into account the rest of the special rules the Alpha Legion has.

Consul type – Delegatus: A Delegatus consul is a Captain given the writ of the Primarch and high command to act out their mind and will. This allows a Delegatus to take Master of the Legion and therefore take a rite of war, making this a much cheaper option to unlock the generic and legion specific rites which significantly alter how you play. However a Delegatus must be your warlord unless the Primarch himself is present.

Rite of War – Chosen Duty: As an extension of the above consul, a new rite of war (or at least new when it was released) called Chosen Duty is available. This allows tactical veterans to be taken as troops and they must fulfil the two mandatory troop slots. Additionally if your Delegatus survives the mission you will earn yourself an extra victory point.

However should he perish you will afford your enemy an additional point and you are also unable to take a Praetor or a Lord of War as your warlord if this Rite is taken as well as be denied an allied detachment. Bear in mind Skorr doesn’t have to take this rite of war but it synergises with him so bloody well.

Strategic Warlord Traits: This is the big rule with Autilon Skorr. If you have Skorr as your warlord and you want to take a strategic trait. You do not have to roll! You can PICK your trait from that list. Any other table and you have to roll, but you get to choose which one you want from the strategic traits.

This is mind bogglingly good in combination with the Alpha Legion which I will expound upon soon.

Equipment: As well as the rules above Skorr has a 2+/5++ save and a master crafted power axe plus a bolt pistol and frag/krak grenades. His stats are OK except for only having 2 wounds, though hopefully if used right this should not be too much of a liability except for the potential to give away an additional victory point if using Chosen Duty as your rite of war. 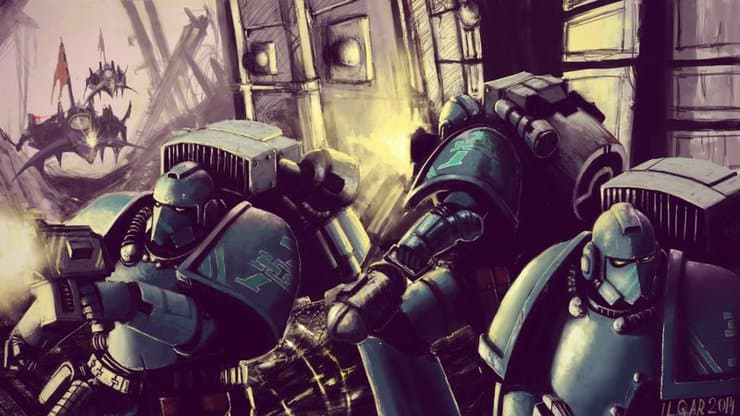 Utilising Skorr as your Warlord

The key point of having Autilon Skorr as your warlord is the ability to take chosen duty as your rite of war and also select your warlord trait. In this situation I would fill your troop slots with veterans. The reason that you are doing this is because A) they now have objective secured and score, but mainly B) they get to select their own special rules to represent their specialised nature.

So what you say I hear?

Well! You can have a mixture of squads equipped with bolters and heavy bolters with suspensor webs and squads with melta guns. I would give the melta gun squad sergeants power swords and the heavy bolter squad sergeants power fists. This would make them both capable of hitting armour and infantry. Additionally you can give the bolter squads the sniper special rule, so you have essentially an assault heavy bolter with 4 bolters that can take on monstrous creatures for you!

Now you can also give tank hunters to your melta squads to up your chances of getting that tank destroyed AND you can give your bolter squads sniper so now you can challenge even big high toughness beasties. Plus with AP2 rending you can even challenge wraithknights.

BUT there is more! You can now combine this with mutable tactics to give these squads further rules such as scout or infiltrate, so if you have first turn you can truly ALPHA strike your opponent from close range.

MORE again!! If you want to go infantry heavy then you can choose scout as your mutable tactic and Skorr and then choose Master of Ambush as your warlord trait so that 3 infiltrating veteran squads can now scout and then tank hunt/infantry destroy.

That is just one way you can utilise the combination of Mutable Tactics, Autilon Skorr and Chosen duty (veteran special rules) to create and intensely overlapping and synergised army. I will give you one more example below of how you can use Skorr to all but guarantee certain strategies.

The name is my own branding (C). Skorr takes strategic genius as his warlord trait granting you +1 to seize the initiative and a re-roll on reserves. Take a command squad with him, bare bones mostly as ablative wounds/bodyguard and stick them in a Damocles command rhino (+/-1 to reserve rolls).

If you are going first or second stick him in a ruins with a good cover save and pop smoke ASAP. In reserve you can have a good combination of flyers, say a fire raptor for anti infantry and 2 Xiphon interceptors with their rotary missile launchers (Heavy 2 S8 AP2 that re-rolls successful Jink and cover saves and rolls d3 times per Penetrating hit, choosing the best one) AND two twin linked lascannons for taking out armour and or 2+ save infantry.

If both the tank and Skorr survive your opponents first turn then you will have your flyers coming in on a re-roll-able 2+. If the tank goes pop Skorr should still be alive so its a re-roll-able 3+. The first scenario is preferable but either way you will be damned unlucky to not have 2 or 3 of your flyers coming on. You can also use this to outflank veterans if you gave them infiltrate rule from mutable tactics so that they pop up behind your enemy with tank hunters/sniper special rules as the flyers assault them from the front.

Its a fairly high risk strategy but I love the beauty of it. 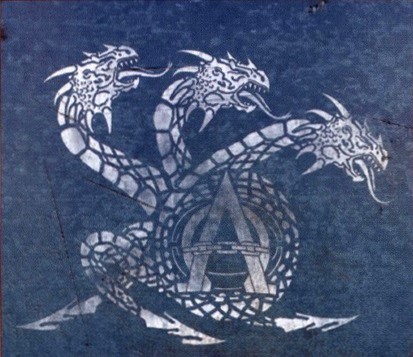 The saboteur is a consul specific to the Alpha Legion and is essentially a souped up Vigilator from the basic consuls. He comes equipped with melta bombs and cameleoline as standard. Like Exodus he is also a lone killer so cannot fulfil the compulsory HQ choice. A saboteur also can’t take standard heavy stuff like bikes terminator armour, thunder hammer etc, the usual sneaky character restrictions. Then there two special rules he has:

Special Deployment: They must be deployed in reserve and arrive by outflank but do not count towards the reserve limit.

Sabotage: When the Saboteur enters play he may do one of two things. He may inflict D6 S6 AP4 hits on a single unit (or independent character who is not in a unit) OR he may inflict a single automatic penetrating hit on anything with an AV value.

These are not terribly impressive altogether but there are some nasty shenanigans you can play with him if you are the kind of person who smothers gorgonzola over their face at night. It is so cheesy in fact I can’t bring myself to write it. I will however link you to Warpstoneflux written by the esteemed Jabberjabber who has excellent reviews of near all the units in 30k going at the moment where he details the cheese incredibly well. Whilst still being appropriately disgusted I might add.

Overview: Fun but not something I would take over other consuls or special characters which are also fun and characterful but have more bite than bark.

Checkout my site for even more great content on 30k, 40k and beyond! 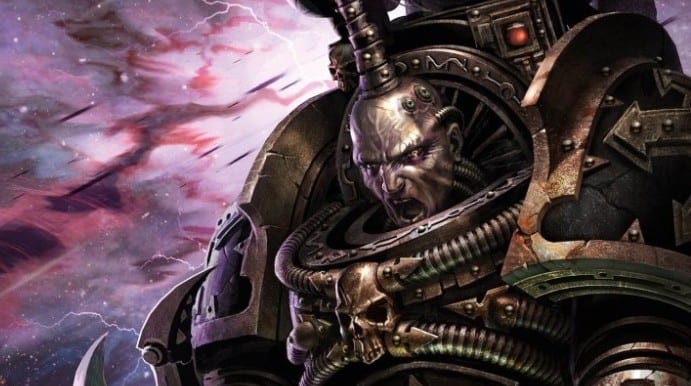 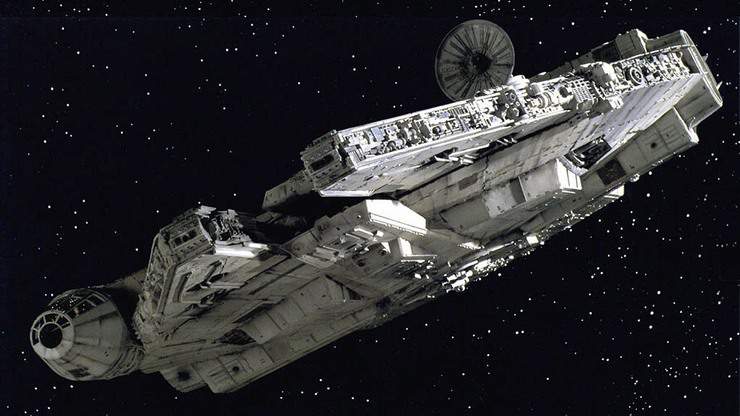 NEXT ARTICLE
Fat Han & Poe vs TLT Scum, X-Wing Battle Report »
If you buy something from a link on our site, we may earn a commision. See our ethics statement.

About the Author: Rob Hill