How To: Painting Lava With a Slaughterbrute 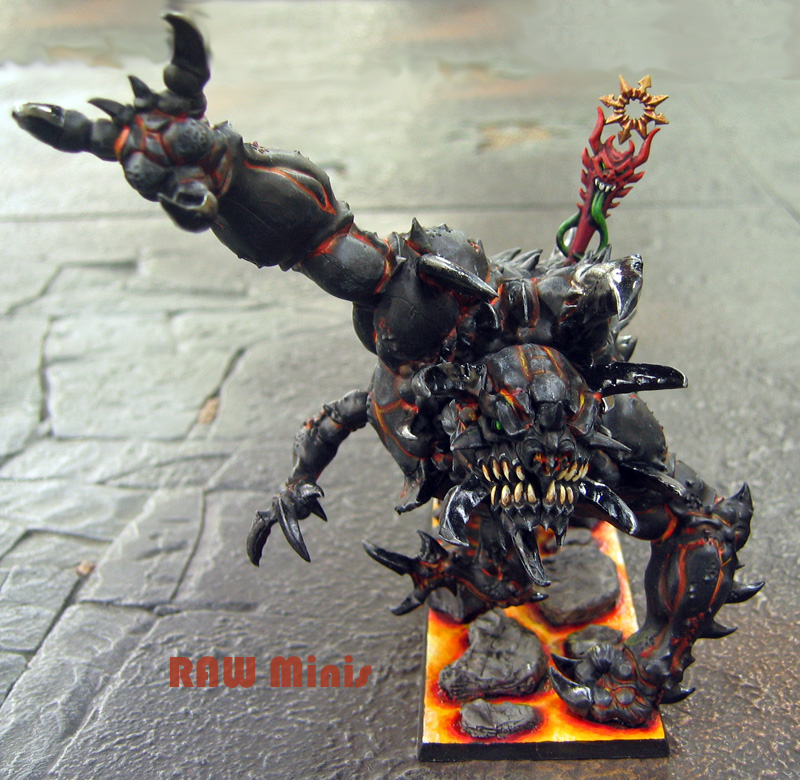 I’ve been doing a lot of lava theme basing for my Warhammer and Warhammer 40,000 Chaos models recently.

I’ve shown some here in previous articles, but I’ve as yet never done a full description on how to do the actual painting.

This article will focus on painting lava step-by-step. And what better model to use than my new Slaughterbrute which is painted entirely as if it is made of lava!

We’ll be using lots of warm colors for this one so get your reds, oranges and yellows together and a little bit of white as well. Ready, steady, go!

This first photo shows the plain black plastic base before we start. Notice that the creature is already painted like he’s burning hot on the inside with molten glow showing through his recesses. This was done with less stages than the base. Since the width of the areas painted is so narrow a single line of red followed by a blended yellow line within it was all that was used in most areas on the actual model. The rocks on the base were made using a two-part epoxy, washed with thinned down black paint (Abaddon Black) then over-brushed with a granite color (Stormvermin Fur). 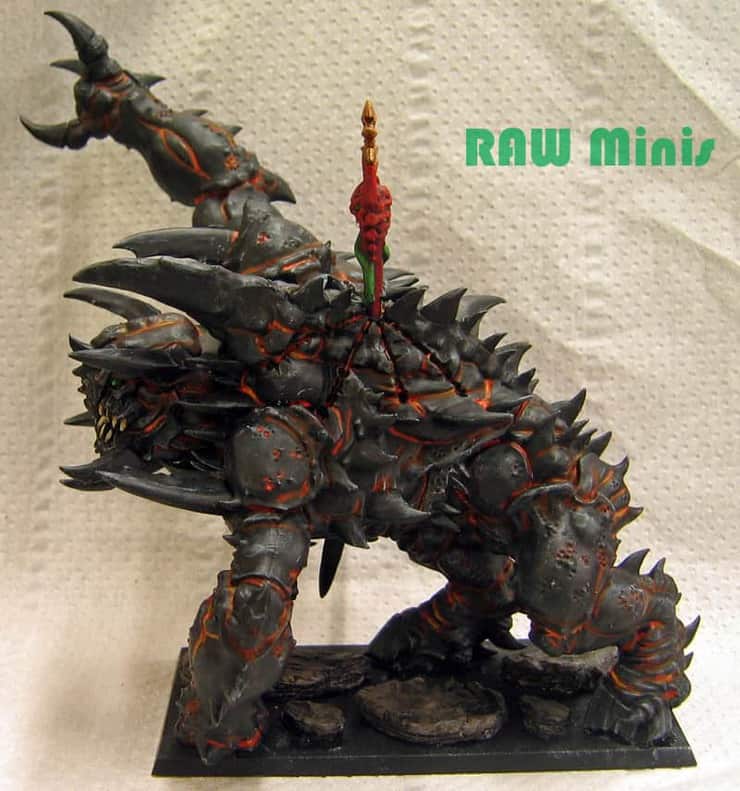 In the first stage of painting the base I used a dark red color, Citadel Khorne Red. I painted this all over the base between the objects on it. 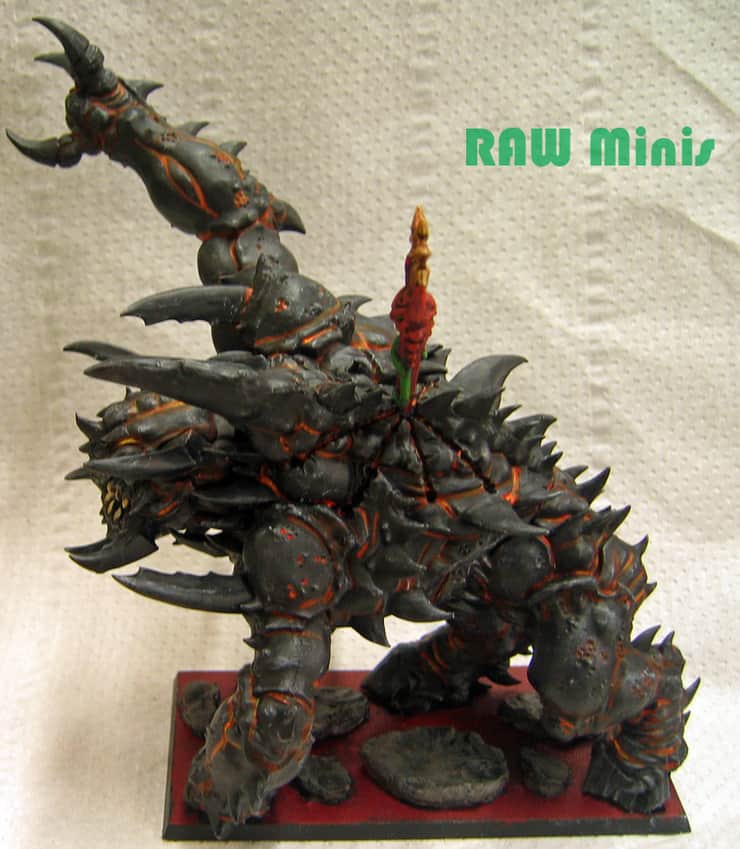 In the next stage I used a brighter red and painted it over the whole existing dark red area leaving a bit of the darker red showing next to the objects on the base. This is because lava tends to be cooler around the edges where it’s touching non-molten objects and warmer in the center of its mass where heat is well trapped and escapes more slowly. Darker colors denote cooler areas, brighter colors will create the illusion of hotter areas. 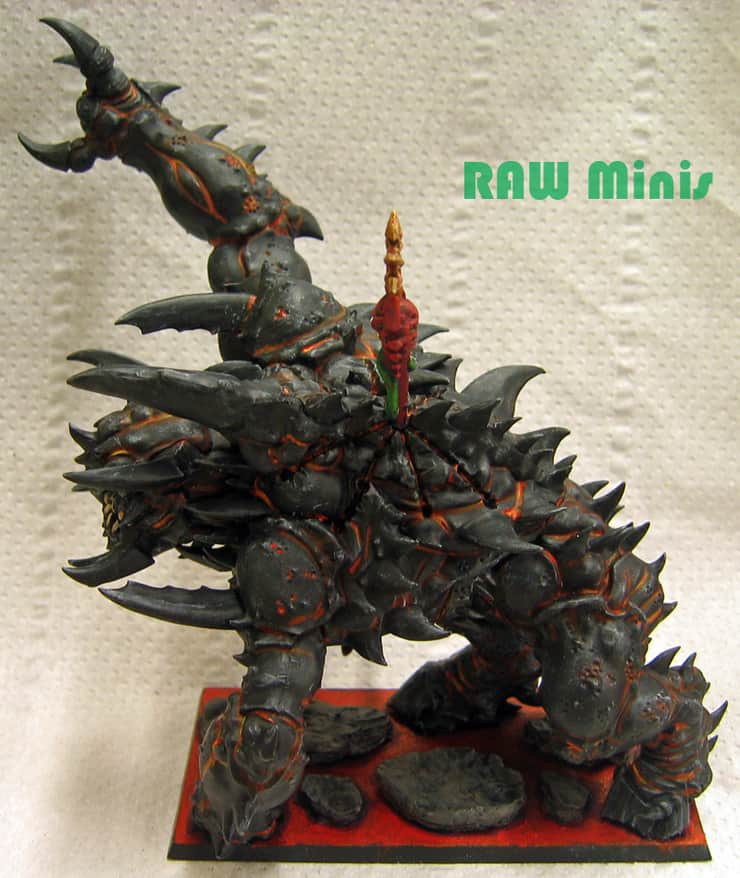 Now paint a medium yellow color over the existing red, again leaving a bit of the last coat showing near the edges of the objects on the base. 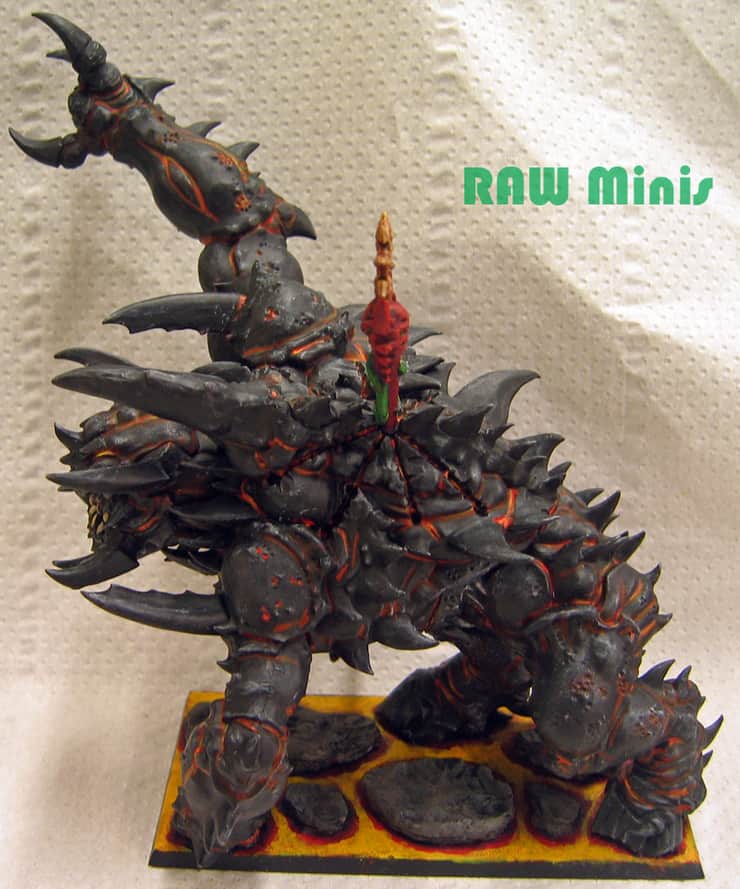 In this next stage I began to blend the edges of the colors together. Of course, I could have done wet blending as I went about the previous stages, but it would have been more time consuming. If one is  trying to win a high-level painting contest it would be desirable to put in the highest level of effort and wet blending during every stage would be the best way to do this. As I have many hobby projects to get to I opted for this quicker method that yields a good looking result without being quite so time consuming. Some wet blending is used in later stages, but eschewed in the early stages.
Use a little bit of orange paint to create a smooth transition between the red and yellow colors on the base. Work with the paint wet and “pull” more pigment toward darker areas and less onto the lighter ones.

Continue the blending process. Use a little more yellow paint to smooth the transitions, pulling it while wet to make the color changes more subtle. Work with the yellow, orange and reds while they are wet for smoother blending.

Brighten up the center of large lava areas by using a little thin white paint. Again, wet blend it so it’s brighter in the center and fading smoothly into the yellow. 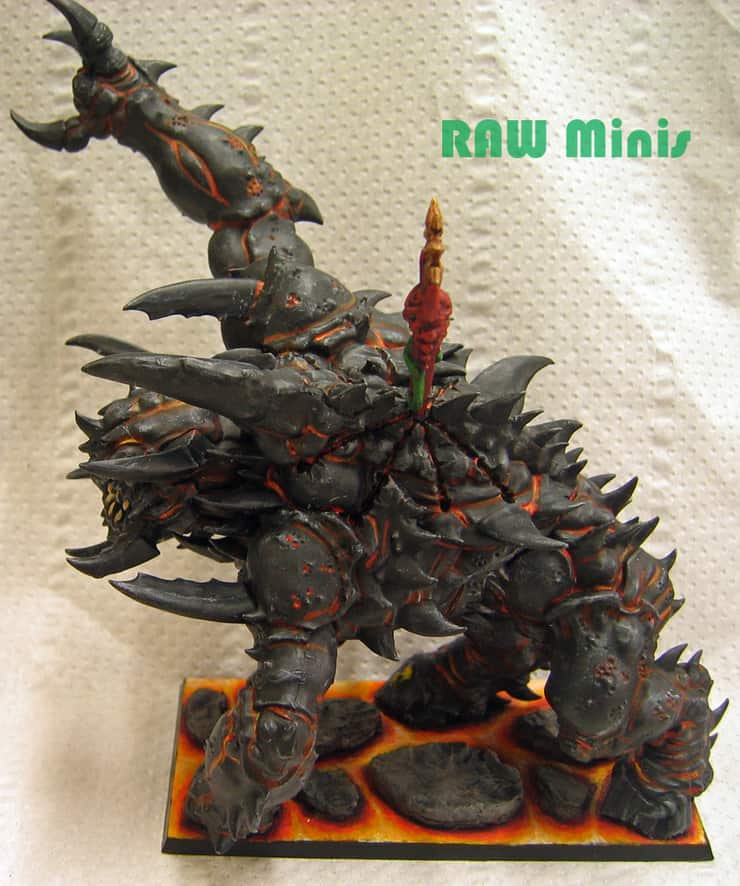 Use a yellow glaze to smooth the transitions further. After the glaze is dry further blend and brighten any areas that may need it. 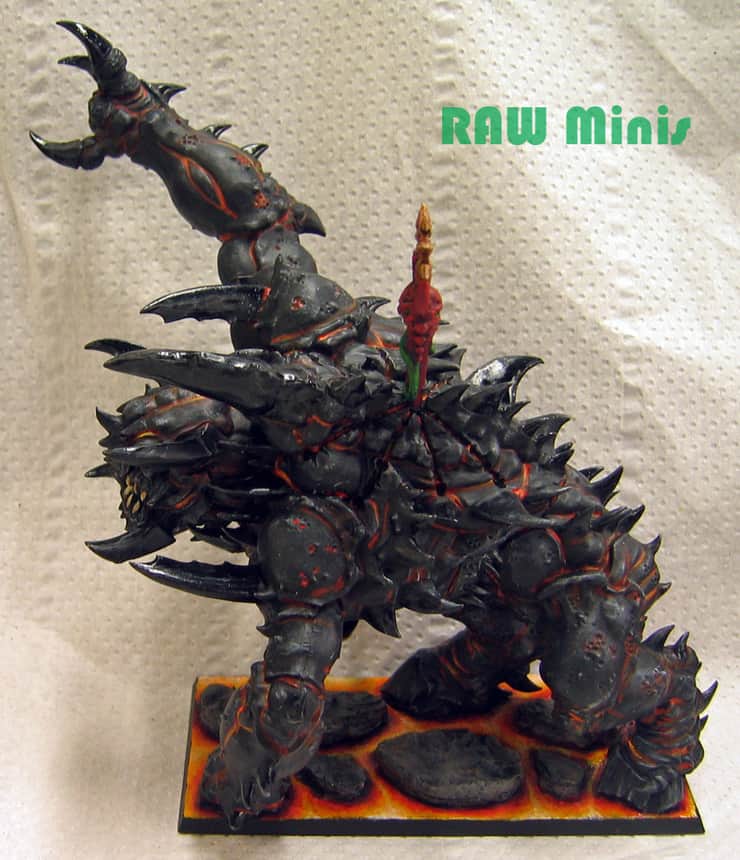 Here is the finished model and base, appearing as an elemental born of Fire and Earth with obsidian claws. As part of that theme notice that he’s advancing in the molten lava, not on the cooler rocks sitting within it. This further implies the molten nature of the beast. 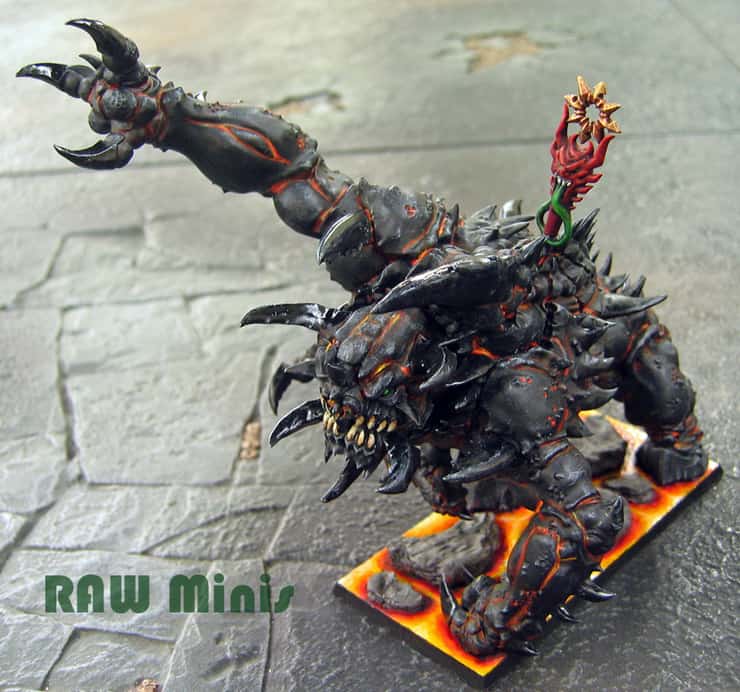 The techniques described here are the same ones used to paint the thinner lava flows shown on some of my other bases like the flying stand on my Heldrake. They’re not only useful for painting scenery, as I’ve shown here they are also useful for painting models that represent creatures that are hot on the inside like the Eldar Avatar and Lord Of The Rings Balrog. They’re another tool to let your hobby creativity express itself freely.
This was a really fun project and one that didn’t actually take terribly long and the feedback I’ve received on it has been incredibly positive. It’s always rewarding to have other hobbyists get excited about one’s work, especially when it helps increase their enthusiasm to complete their own projects. More hobbyists, more hobby! 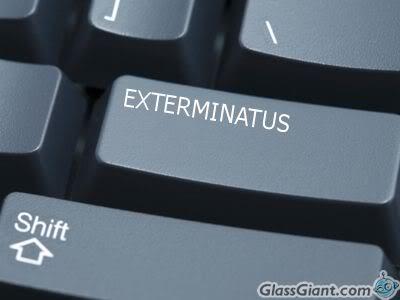 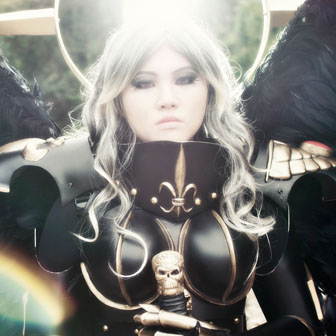 NEXT ARTICLE
Saint Celestine Cosplay- Pic of the Day »
If you buy something from a link on our site, we may earn a commision. See our ethics statement.