Good morning internet! It’s JStove back in action, your resident purple people eater and Emperor’s Child, the original son of Legion III. Today, I want to talk to you about Horus Heresy games.

Now, if you’re a marine player of any kind, and 75% of you are, (Thanks GW!) then you’re probably at least passingly interested in playing 30k. If you’ve been a marine player for a decade or more, and you’re a first founding legion, chances are, you’ve already amassed all the toys you need to play 30k. Kudos.

For everyone else though, there’s a problem. That problem is called being an adult. Being an adult means that you have to have disposable income to spend on toy soldiers, and sometimes, when you see the price tag on forgeworld models in British Pounds Sterling, you get this sharp twitch of pain in your butt, where your wallet used to be. 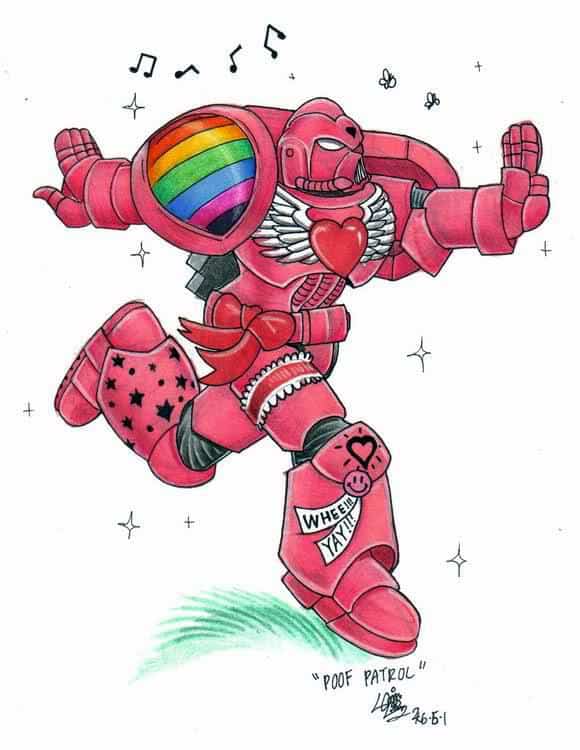 Sometimes, you tell your wife how much that Reaver titan on your desk actually costs, and you end up sleeping on the couch that night. Sometimes, you walk into a dark alley behind the Forgeworld studio and you find a couple of rubber molds mugging a defenseless credit card.

Of course, not everyone has those kind of problems. Some people stay single, don’t have kids, or they have good jobs that let them buy all the toys they want. That’s great for them. I’m not talking to them. I’m talking to all the average jerks who thought it would be cool to go into business for themselves and open up a bits store because they love the hobby, only to have Tom Kirby slam a car door on their fingers a couple years later. (That’s just a friendly cheap shot at MBG if you haven’t been paying attention to GW politics lately.)

If you play marines of any kind, you probably own at least one of these. Lately, we’ve been handing them out like candy. Most folks can poop one of those black reach dreadnoughts, and now, the chaos players can do it as well with the DV helbrute. Except ours is meaner looking and spikier. That makes pooping it a much more traumatizing ordeal.
Most space marine players have a love/hate relationship with the dreadnought. We all own them, but they’re vehicles, and depending on which edition of 40k you’re playing, being a vehicle is always either a really great thing or a not so great thing. Then good old Mat Ward came along, and he decided to break dreadnoughts into all these different little categories. It used to be we just had gunny dreads, blood angel furioso dreads, and gunny-fisty dreads. Ward decided 3 wasn’t enough. Now we’ve got libby dreads, death company dreads, armor 13 building puncher dreads, extra old dreads, and smarter, faster, forgeworld contemptor dreads.
So what happened in Horus Heresy? Well, the Forgeworld guys tore all the brakes off and just said “screw it!” Now you can get 3 dreads in one elite slot, and you can pick from the long list of toys from all the different Wardnuts to build a 3 pack of your favorite dreadnuts. 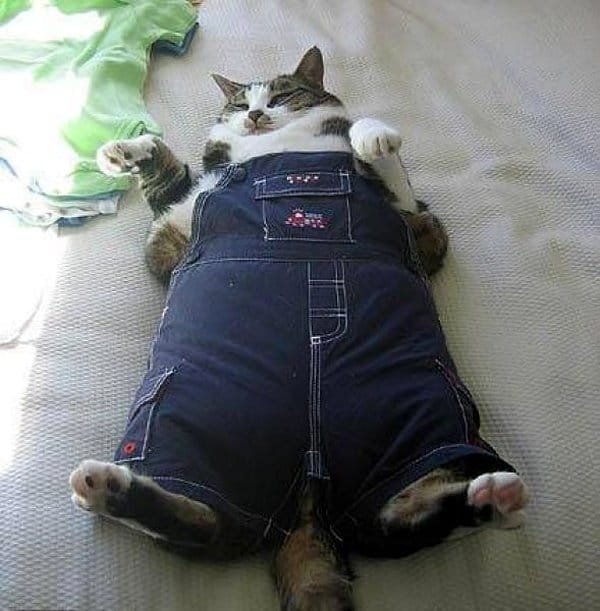 Now, in a utopian society, we’d all own 6 contemptors, because CONTEMPTORS ARE COOL AS HELL. Unfortunately, we’re not in Star Trek times yet, we haven’t advanced beyond money or wearing pants, and we actually have to buy our toys instead of just being given them. There seems to be a direct correlation between not wearing pants and getting free toys.

When you were a kid, you got stuff just for sitting around in your diapers and pooping. Now that you’re an adult, you have to drive down to the hobby shop and buy your toy soldiers with your own money, and wear pants all the time. I’M ONTO YOU, PANTS.

So while we all wish we could just have piles of forgeworld toys, what we do actually have is piles of dreads sitting on our shelves, because everyone knows someone who has that redheaded stepchild black reach dread.

And we can do something with that. Hell, why not? If you’ve got them lying around, use them.

Now, the nice part about heresy era games is that like I said, we pretty much have all the options on the table, and then some. We can do cool stuff like add havoc launchers and graviton guns, and did you notice these old men are all WS and BS 5? Because they are.

Of course, there are some post-heresy options that don’t exist yet, so to speak. Examples of course being the hurricane bolters we’ve got on ironclads, and the now ubiquitous assault cannon that back in 30k was only available as a prototype model to contemptors. Aside from that though, we get pretty much everything else that comes in a dread box.

The nice thing about the plastic dread kits is that they’re spoiled for choice. In the old days, when all the dreads were metal, you got kinda screwed. The chaos dread came with a ton of options, but that was about it. There was a metal dread for blood angels that had the extra combat arm to make it a furioso, a dark angel one that had the missile launcher to make a mortis dread, and the bjorn the fel handed kit for space wolves, which was just a hairier version of the typical assault cannon and fist vanilla dread. It was a bad time to like dreadnoughts, they were a pain in the ass to equip and play with.
The contemporary plastic kits come with pretty much everything, and what they don’t come with, you can get from forgeworld, if you’re desperate enough.
Now, I like the furioso kit, but there’s no magna-grappler or libby dread options in the heresy, so only one version in that kit is actually usable.

The venerable dread kit probably looks the coolest, but has the weakest options. He has an assault cannon that he can’t use, a plasma cannon, and a twin las, and he’s stuck with a really cool fist, but has no potential to go mortis or double punchy.
The vanilla dread kit is not as awesome looking, but has a better spread of toys. He also has the unusable assault cannon, and the twin las, but his saving grace is that you can pull the fist for a missile launcher and go mortis.

The winner in my book is the ironclad. The ironclad looks the coolest with his stacked up armor, has the options for assault launchers, HK missiles, and this is a big deal, comes with 3 melee arms- A buff power fist, a mega buff siege wrecker, and a chainfist. His only gun in the box is a hurricane bolter, which like the assault cannon, he can’t use, but I’ll forgive him for that because I think the hurricane bolter is easily converted into any other dread gun with a little work.

Now, the biggest deal here when talking about loading your dreadnuts for bear in 30k is stretching out your kits. The idea is to be able to open one box, and have all the parts you need to properly equip your leftover redheaded black reach dreadnut. Because let’s talk turkey here- You aren’t really excited about that multi melta arm. You have way better options available than that MM, its dragging you down. If you have enough parts to swap, we can actually use the BR dreadnut.
Lets look at some toys 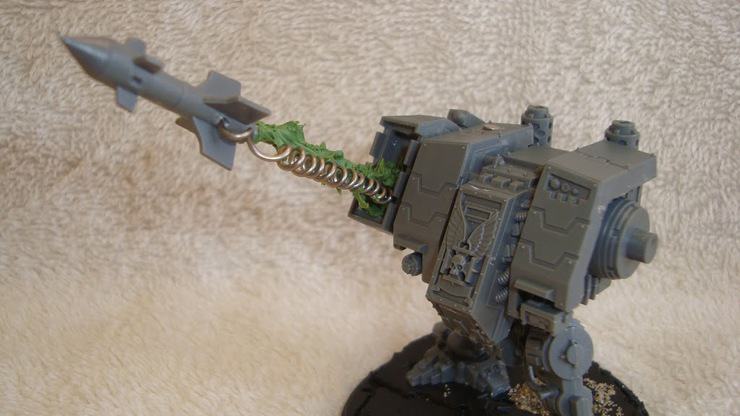 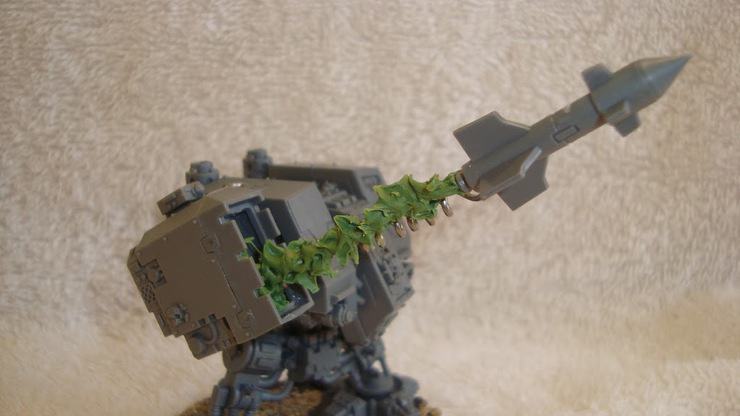 Dreadnut Claddy with missile launchers converted out of the hurricane bolter shell. I wanted to do one with at least one dynamic launch effect on the model for cool factor, and put a TOW cable on it so it looked like a wire guided missile. All the military nuts will get a kick out of that little detail. The missile is of course an imperial guard fat ugly HK missile, and would never naturally fit in the launch box, but that’s okay, because most TOW missiles are tube launched with deployable fins, so the idea is they pop out after its fired. 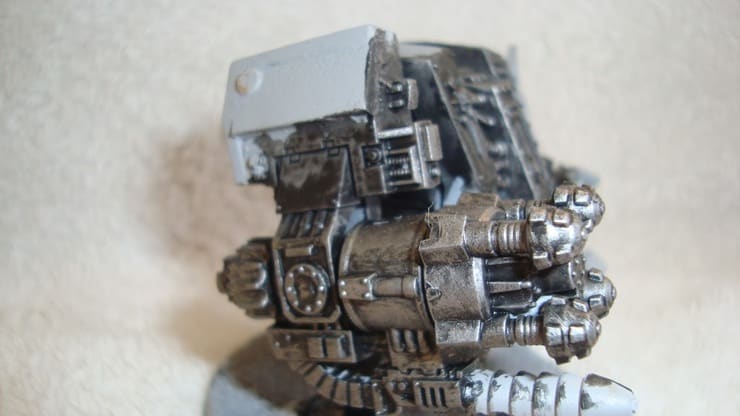 This here is the Black Reach dreadnut with his gun arm replaced by the ironclad’s leftover siege wrecker. The problem with most dread arms are of course they are right or left, making it harder to make double fisty dreads without serious chopping or shopping. You can solve this problem by paneling off the bevel on the front of the dread’s arm armor, so that its flat all the way around, and that way you can convert a left arm weapon to a right arm weapon, or vice versa. The dimple on his shoulder is the magnet for attaching his optional weapons. 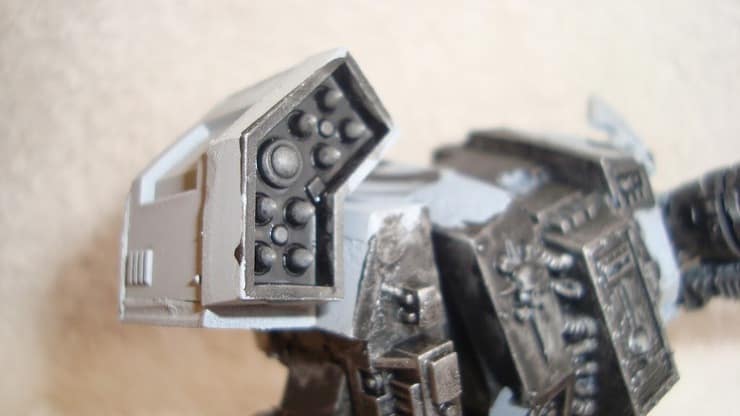 A missile box from a stormtalon gunship that I got from a friend (don’t ask me why he didn’t put the missiles on the stormtalon, I think they’re the best weapon option on it too) that I rebuilt into a cool looking havoc launcher, magnetized to sit on the dreadnut’s shoulder. 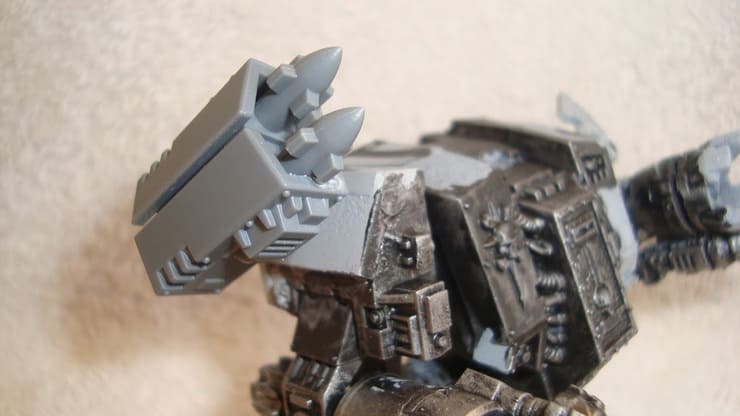 The double HK from the ironclad kit, also on a magnet. I opted to build the HK missile tubes as a separate assembly so I could swap them around from dread to dread as opposed to just committing and gluing them down. Added bonus is that now they can swivel around and look cool.

One of my Claddy dreads with his full loadout of available weapons arrayed before him. He can go double fist, single fist and launcher, or double launcher. (I own 2 clads and converted both hurricanes to missiles) and he has his heresy option havocs or HKs for his magnetized armor dimple. I converted his fists to have heldrake talons.

One of the things you must consider when equipping your 30k dreads is that the HKs and the havoc launcher add ons are a big deal, and they add a lot of firepower to your dread. As I said earlier, 30k dreads are BS5, so any extra firepower you add on is very accurate and very significant. For example, an anti infantry dread with a plasma cannon, missile launcher, and havoc launcher will waste a squad of marines by himself. He drops 3 templates, and 2 of them re-roll with a BS5 reduction, so you are pretty much gauranteed maximum target saturation. Likewise, a double autocannon/double missile double HK missile dread can put an obscene amount of reliable high strength fire down the field in one important turn, making a mess out of a predator squad if he can get side armor.
Even if you don’t go mortis, you still have an insane amount of hatred- 30k dreadnuts can get melta guns or graviton guns under both fists, both of which are awesomely powerful. The graviton has haywire, nuff said.

If I had another BR dread, I could convert up the second siege wrecker to make it a double fist nut, but that would make him the 4th dread and a new elite slot, as a talon only gets 3 to a team. 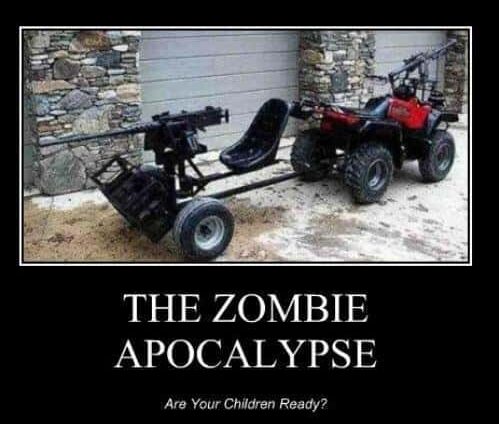 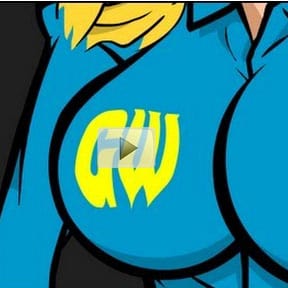 NEXT ARTICLE
GW?: Inside the Belly of the Beast Video »
If you buy something from a link on our site, we may earn a commision. See our ethics statement.