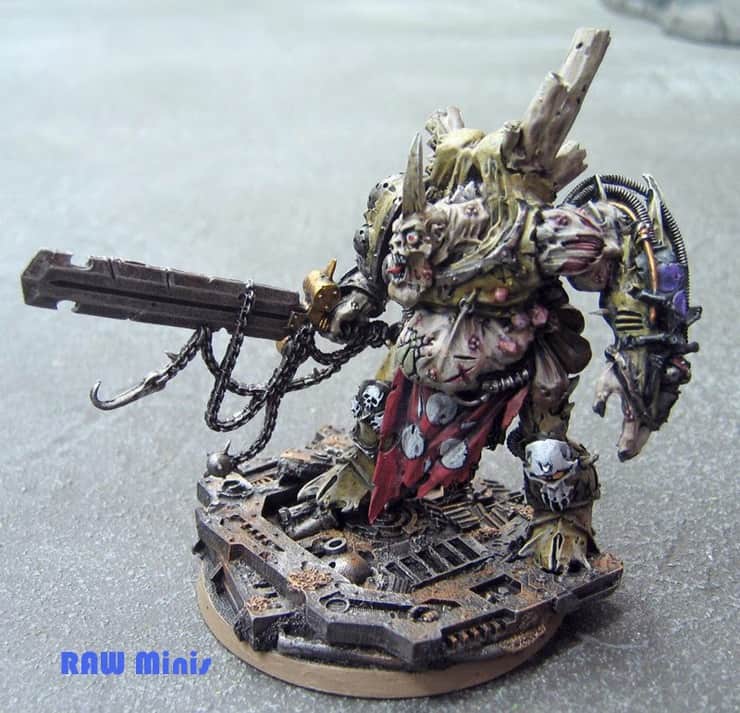 There has been much Internet chatter over the past year about Games Workshop discontinuing Finecast and there is foreshadowing in their new releases and store stock that it’s true.

Based on my many experiences with Finecast, I will welcome this change if it is true. Here’s why.

To be blunt, Finecast overall is not a good model production material. While it works passably well for some of the chunkier GW models as a general production medium it is fraught with problems. Here’s a list of just a few I’ve encountered. 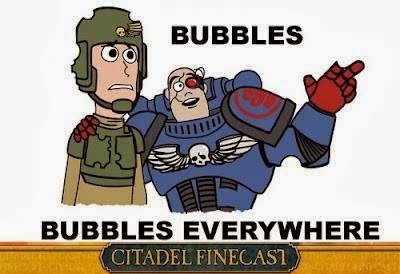 First, tiny slender parts like pointing fingers and narrow staffs and weapon shafts break off far too easily. Example, I already had the staff topper to my Dark Apostle model break because the attachment point just below the head is whisper thin. Luckily it was just (barely) thick enough to be able to pin it back together.

I wonder how many people who own the Finecast Dark Angels Asmodai model already are missing that minute pointing index finger that’s nigh impossible to replace. Granted, parts like pointing fingers are so fragile that they often break off of conventional plastic miniatures too, but they seem to be even more fragile in Finecast. And unfortunately, that’s hardly the only problem with Finecast, which takes me to the next issue.

Finecast is so flexible that top-heavy models with fine attachment points at the base actually sag under their own weight. For example, the Jump Pack Chaos Lord which used to be a pewter alloy model is now available in Finecast. It looks good in the Finecast material and is nice and lightweight, but it can’t support it’s own weight. 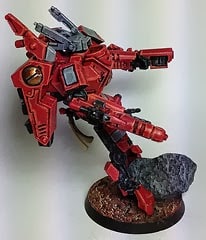 Does Your Tau Commander Lean Too Far?

When I finished painting it I set it on a shelf and a month later it was listing badly toward its own rear. I realized that the weight of the jump pack at the top rear of the model was actually causing it to bend backwards over time due to the very thin part of the model attaching it to the base being unable to support the weight. I also had one of the tiny decorative spikes break off already from the backpack (after the photo shown was taken) and reattached it at a different angle so that there’s a sturdier bond than having such a thin fragile part projecting outward only to break off again at the slightest contact.

Next, fine detail on Finecast tabards of formerly metal models (e.g., Howling Banshees) often come out of the mold only partially formed and defective. A friend of mine bought a selection of Eldar Aspect warriors in Finecast and had poor quality in this area on a number of models.

Needless to say, he’s not buying any more of them. GW’s old molds can be reworked to take Finecast instead of pewter, but some of the old sculpts that were designed to be cast in pewter aren’t necessarily viable to be cast in Finecast. 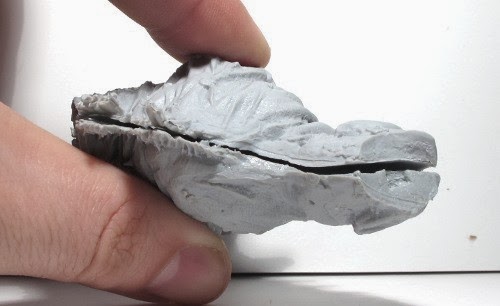 Sculptures and the material they are designed for are normally reconciled in the design phase to ensure the model can be cast with good quality. Switching older sculpts to a new material circumvents this process and it clearly shows with certain models that simply will not come out of the molds well in Finecast. 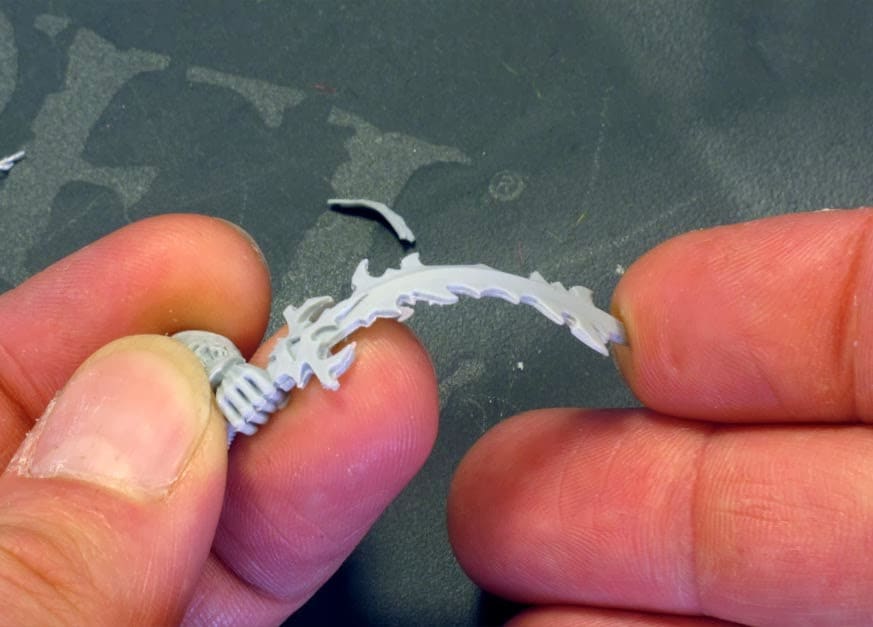 Finecast is also inconsistent in its flexibility or lack thereof. Some models come out really flexible while others are brittle and easily broken even while removing them from their sprue. Example, I’ve seen the klaives (swords) on some of the Dark Eldar Incubi models break while being carefully removed from their sprues because they were so thin and brittle they could not withstand enough pressure to clip them free without damage.

I’ve also see Finecast models that are so flexible they change their shape at the slightest pressure. While this is better than being brittle and breaking it causes other problems. Over time I’ve had the shape of a model’s staff change simply from storing it in a foam figure case tray.

Finecast is of course lighter and easier to work with than metal and I have some decent Finecast models. The Finecast Necron Nightbringer is much easier to build and paint than the old metal version and I rather like mine.

The Nurgle Daemon Prince (shown elsewhere in this article) is also nice and chunky and turned out well in Finecast. Large models like these that used to be heavy and unwieldy to build in metal seem to do okay in Finecast where the advantages of the lightweight material are maximized and the problems with it are minimized. The material is clearly not good as a general production material for an entire range of products with widely varying sizes, bulks, and fine fragile details.

Another problem with Finecast is that it often has a noticeable unwanted texture to it that can make getting truly smooth looking paint jobs nearly impossible. Example, though it turned out reasonably well I was never able to get the some painted areas of my Warpsmith model as smooth as I’d like because the Finecast itself has a coarse texture to it.

The aforementioned problems with Finecast are regular and persistent such that I mostly avoid buying any Finecast models if possible. Only the models that I “have to have” (i.e., want badly enough to put up with the problems) will I purchase in Finecast.

Though not everyone will agree, apparently I’m far from being the only customer who feels this way. The Finecast kits at my local GW store are slow movers and this is certainly true for GW overall as they have begun removing many Finecast kits from their store shelves by not restocking them once those that are already there finally (if ever in some cases) sell. To put it bluntly, they are not selling a whole lot of out of date Orc Wyvern sculpt for $66 (US) or boxes of five Vampire Counts Blood Knights for $99.

Many Finecast models, even the great looking ones like the Blood Knights, are simply too expensive for what they have to offer customers to sell in any significant quantity. They move at a snail’s pace and are dust collectors on GW’s store shelves.

Adding to the problems with their formerly metal product line GW raised prices significantly on many of their formerly metal models when they were converted to Finecast. Since the Finecast material is cheaper for them to use than pewter alloy this greatly increased their already high profit margin on those models.

Even when made of pewter the blister packs cost more to produce than the contents and Finecast must have boosted that profit margin per model to soaring new heights.

GW’s justification at the time was that Finecast is a premium product and more desirable than metal to their customers because it is lighter, holds paint better and is easier to build and convert. All of those things are true, but completely ignore the long list of problems with the material.

Customers quickly came to realize that Finecast is far from being a premium product and sales quickly dropped off after the initial excitement of seeing what it had to offer. 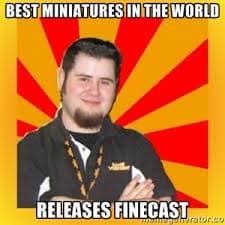 I’m still astounded that there are as many customers as there are that say they actually like Finecast. GW’s terrific premium products are in polystyrene plastic and if they want to charge their current sometimes outrageous prices then all of their models should be in that premium material. Finecast kits have too many problems, have too few if any optional and extra parts and cost way too much money for their often problematic quality. People may not like some of GW’s current price points which have soared to new heights in the past two years, but they are much more willing to pay them for nice multi-part kits compared to Finecast versions with their limited options and potential material problems. Games Workshop, if  you’re reading this, please take note: your premium products are your main product line plastic kits. You arguably make the best ones out there and that is what most customers prefer.

So in conclusion, if Finecast really is being phased out sooner rather than later I’ll gladly say farewell to it and look forward to even more great standard plastic kits from Games Workshop. If we’re going to pay the current prices GW is charging for their kits then please GW, give us the “good stuff”.

The quality of GW’s current plastics is fabulous and keeps improving all the time. Even plastic starter set models now have an unprecedented level of detail and beauty that rivals and even surpasses metal models of days gone by.

Finecast never lived up to being the premium product it was presented to be.
Premium prices are for premium products and GW’s best products these days are their regular plastic kits.

If you see a lot Chaos Space Marine models in Finecast mentioned and used in the pics shown in the above article there are a few reasons for that. Chaos Marines got a number of new models and great looking older models in Finecast with their newest Codex last year.

Though I was not pleased with the fact that they were Finecast instead of ordinary polystyrene plastic I bought several anyway as Chaos Marines are my favorite model range and I really wanted them enough to put up with it. I still have mixed feelings about some of them. Yes, they are lighter than metal and hold paint better, but the issues described above with some of them are more than a little annoying. Since the Chaos Marine release I’ve become even pickier than I was previously about what models I will and will not buy in Finecast and in general I avoid it. 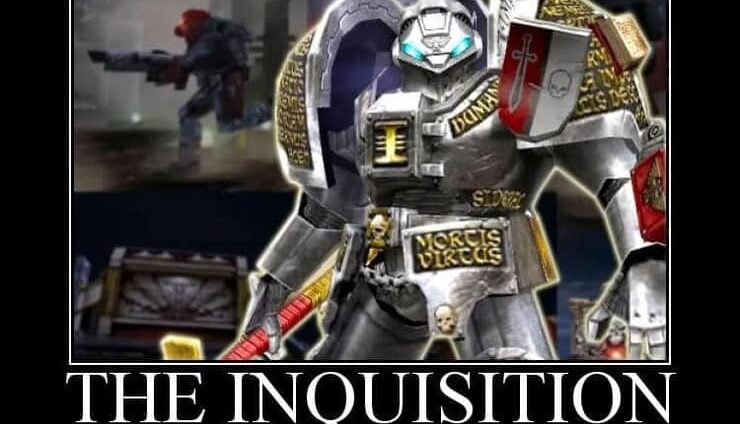 PREV ARTICLE
« More Now than Ever- Inquisition Pic of the Day

NEXT ARTICLE
40k Unboxing- NEW Fire Raptor from Forge World »
If you buy something from a link on our site, we may earn a commision. See our ethics statement.