Casual Vs Competitive: 3 Tips on Teaching Age of Sigmar

By Travis Perkins | January 28th, 2019 | Categories: Age of Sigmar, Editorial, How To Tutorial 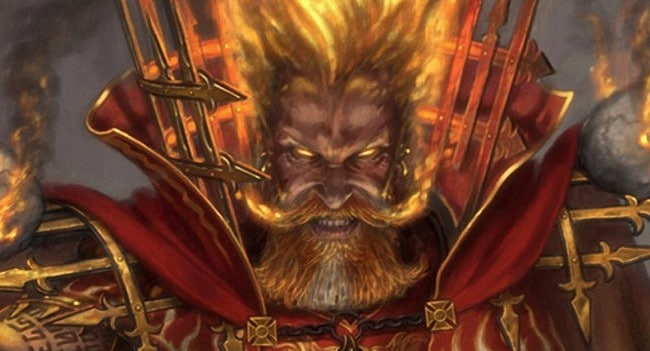 Looking to get into Age of Sigmar or teach your local scene about the game? Check out these three tips on bridging the gap between casual and competitive.

One thing I’ve noticed over the years is that new players may find playing with experienced players intimidating. Even players that used to play but took a year or two off and want to come back are sometimes put off by the large battles and constant talk of rules back and forth. For people who regularly play, it’s easy to just shelve rules like spending command points, moving predatory spells, etc. in your mind and not really think about the basics for how they work.

In the interest of finishing the game in a reasonable amount of time, experienced players generally know the core rules and even core rules for other battle tomes (depending on your local meta) and don’t need an explanation for every step. This is not a good environment to teach new players or returning players the rules. A 2000-point game takes a lot of time, covers a lot of rules, and can generally be overwhelming. Luckily, I have found 3 solutions for this problem. 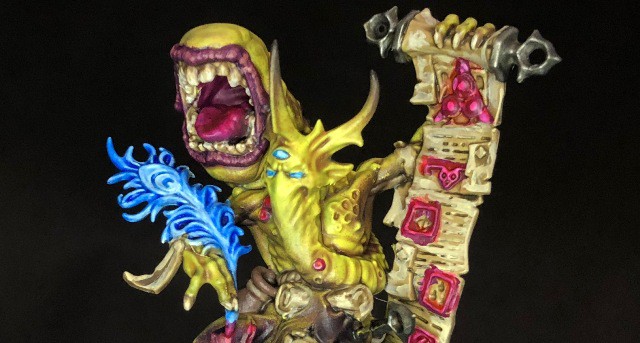 Solution 1: Play the scenarios from the starter set and ignore points.

I bought the first starter set for AoS well before the general’s handbook came out and we just threw the models on the table and went through the scenarios. This was a great way to learn how charging, running, shooting, etc. worked. Each scenario focused on a certain aspect of the game. Also, having only a couple of warscrolls out helped us learn the individual units and get an idea of what they could do.

Now, I’m not saying this is the only way to go. After learning the game it was clear the Stormcast starter set was vastly superior to the bloodborn and there was no real way of balancing armies until general’s handbook came out. But, as a learning tool, I highly recommend going through those scenarios and throwing out the points. Most of the starter sets have battleplans for you to try out. Just make the battlefield smaller and run them with a couple of units to get the hang of things. 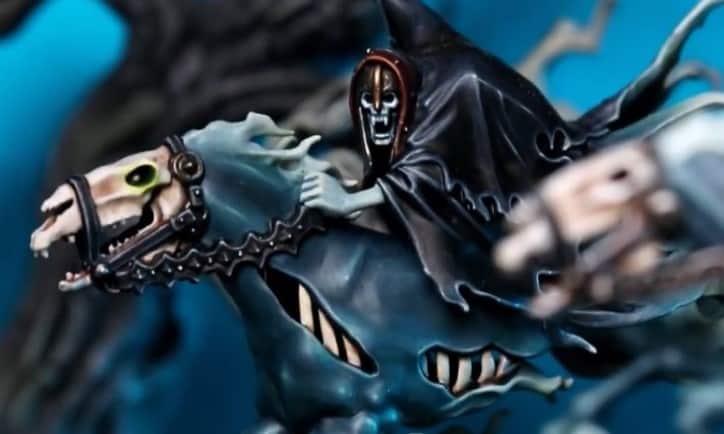 This rule set is great for new players and even better because it doesn’t use the general’s handbook or any of the battletomes. All you and your buddy need to have is something like 2 start collecting sets (or a starter set) and this magazine and you are good to go. I’ve played through most of these battle plans and I can tell you coming from 2000-point games that take 3 hours this is a great way to get some quick games in. Also, it really helps players learn the core mechanics like turn sequence, positioning, piling in, etc.

The low model count is great as well as it allows you to learn your warscrolls 1 or 2 units at a time as well. I started a Nighthaunt army this year (check out this article) and it has been great test running my units in this. The games are fast (around an hour), come down to the wire, and are interesting both strategically and narrative. A bonus to this is that rumor has it the February White Dwarf is going to have rules to turn the skirmish game into a campaign, which sounds like an awesome idea for Thursday night hobby night. 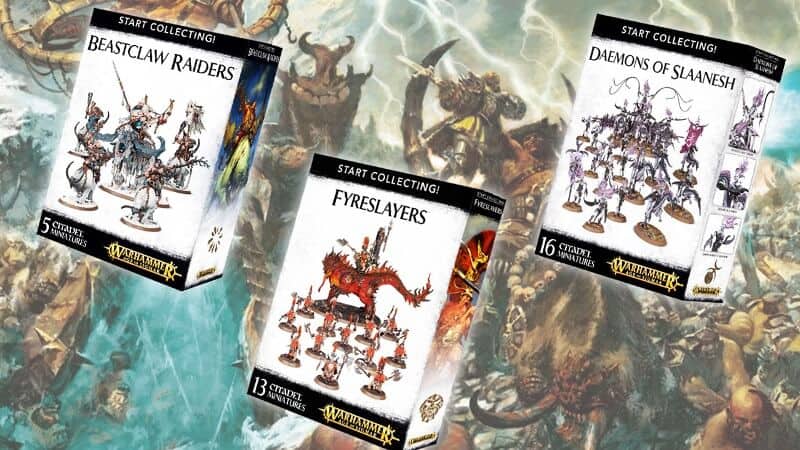 Solution 3: Start small and work your way up.

I only recommend this option if the person you’re teaching is an experienced wargamer and is 100% sure the army they are playing is the one for them.

Start off getting the battletome (if it’s an updated one) and introduce them to Warscroll Builder. Then have them buy 500 points worth of models and play a couple games with those to teach the core mechanics and get familiar with their allegiance rules. Then up it to 1000 points and play some of the matched play battleplans, along with terrain rules, endless spells, look out sir, etc. and the more advanced rules that tend to bog down the games. Then bump that up to 1500 points and throw in a battalion or two and if you have it some deep strike units. Finally, at 2000 points they should have a good grasp of the game. Just keep reminding them rules they forget, how things work, etc. By 2000 points you should be able to mostly avoid being an armchair general and they should have their own style of play and tactics. 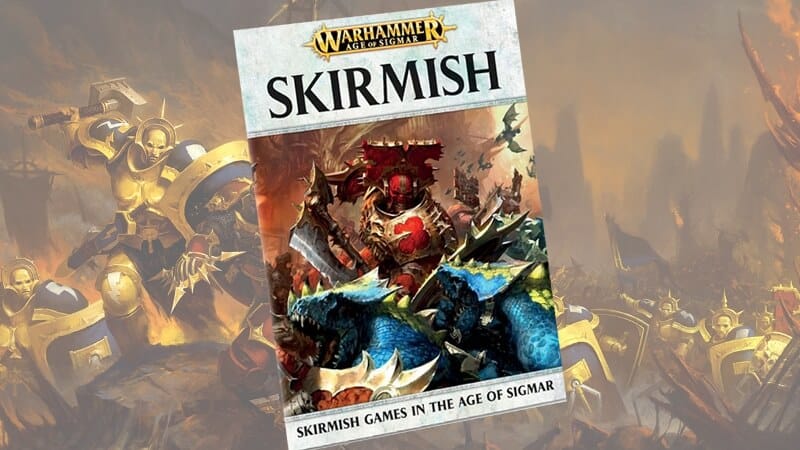 Personally, my favorite way to teach people is solution 2 (skirmish) as you can break out models fast and burn through games any day of the week. Starting at 250 renown, is great for learning warscrolls and how all aspects of the game work. Sure, the skirmish rules are a little simpler and slightly different from the non-skirmish game, but generally, once they understand something in skirmish, they will understand it in larger games. It forces a smaller pool of models as well which is great for learning warscrolls in and out so in a larger game they won’t need to revert to their book or app as frequently saving time.

Also and most importantly, is that it is the CHEAPEST way to get dice on the table. All you need is a handful of models and the January White Dwarf. Everything else is free and online, so you’re letting your friends and family dip their toes in to see if they like the water. It also lets them play with whatever “Grand Alliance” models they want so they are not pigeon-holed into one army to start with. Even experienced players like the games as they are fast-paced, and it lets them use models they may have not been able to use before. For example, I probably won’t use the Lord Executioner from the Nighthaunts anytime soon in my larger games, but he is a great model for the skirmish type of scenarios. 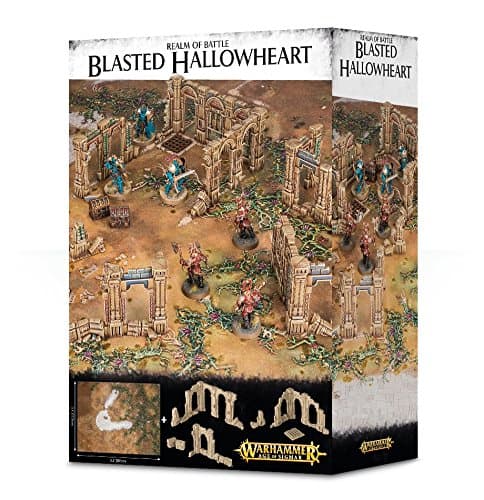 If you find you are liking the Skirmish type of games, I would recommend you add the Blasted Hallowheart set to your collection. This is a cheap way to get an awesome board (not quite 6 x 4 but close) that is broken up into 4 sections. For me, I have been finding 2 of these boards together work great on a kitchen table for the skirmish games. Also, it comes with a decent amount of ruined scenery and some treasure chests that can work as objectives. It’s certainly not enough scenery to cover an entire board but it’s a good start and you can add to it down the road. Finally, it comes with a set of scenarios for you to try, just instead of using the wounds they recommend in the rules switch it to the re-known system. Below is a couple of pictures I took of 2 boards on a standard kitchen table, the board and the brown unpainted ruins is everything that came in the box. The rest is homemade scenery, which you can read about here. (Minus the wizard statue I got that as a present when I was younger) 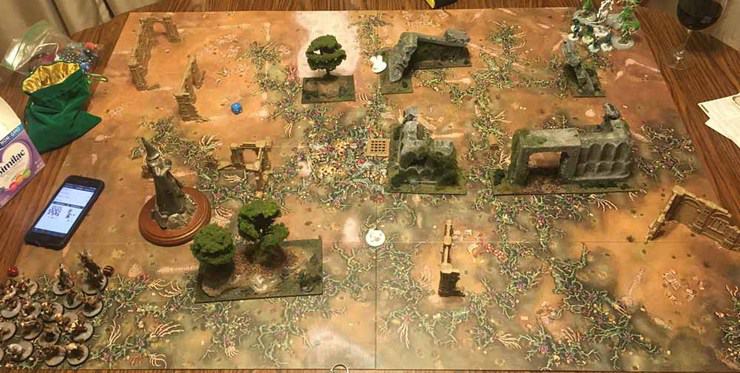 Tips for the teacher:

These are some tips I’ve found while teaching players that makes them enjoy the game more. 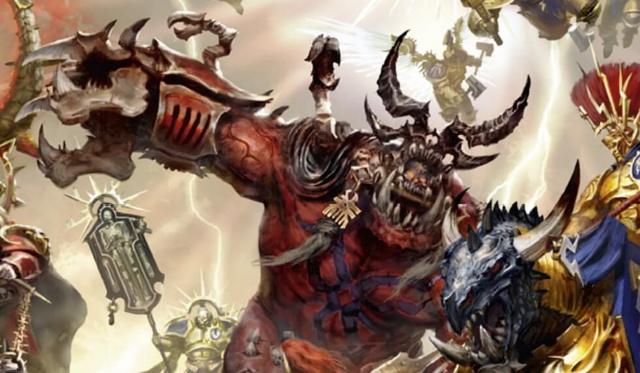 There you have it. These are solutions you might find helpful to teach your friends and family how to play Age of Sigmar. It also helps to have them watch through the let’s play videos GW did before starting the process, but it’s not necessary. 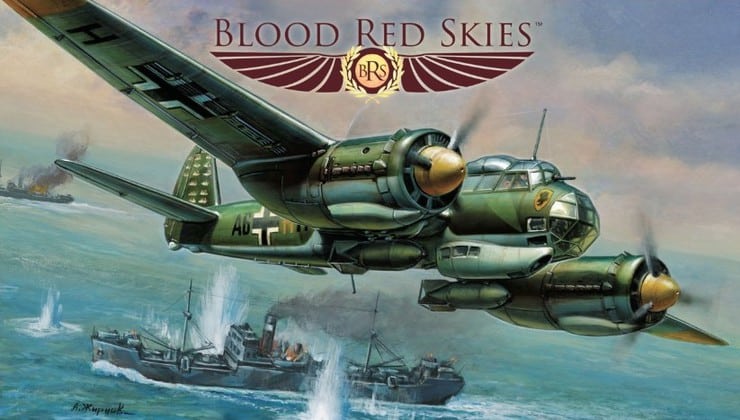 NEXT ARTICLE
New Aces Arrives For Warlords Blood Red Skies »
If you buy something from a link on our site, we may earn a commision. See our ethics statement.