10 New Books On The Way As GW Drops Codex FAQ 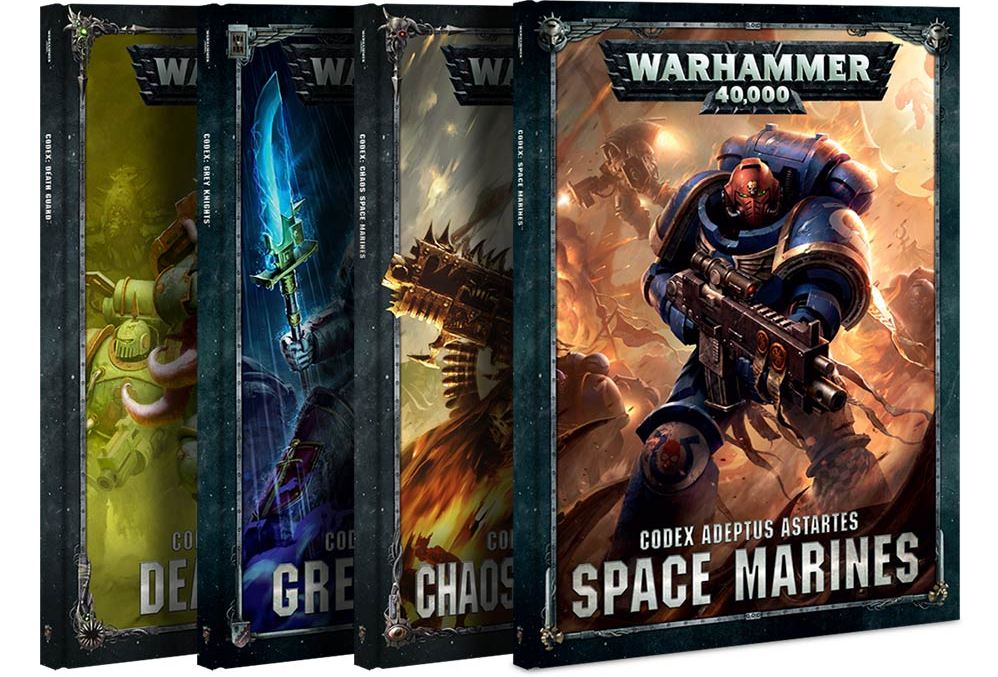 Games Workshop just dropped a bombshell teaser and a FAQ concerning the 8th Edition Codex books.  Do not miss this one!

Just breaking the anticipation now, Games Workshop will be releasing 10 new codexes before Christmas, starting with Space Marines later month. After that, Chaos Marines and Grey Knights codexes and so on. 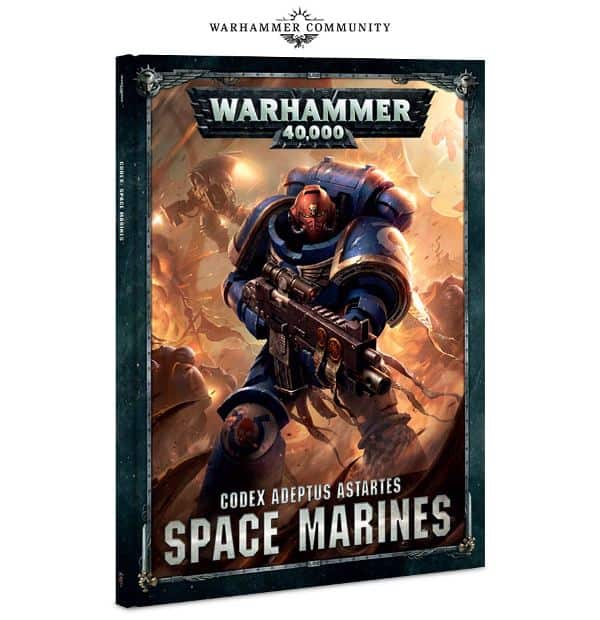 These new codexes will have army specific Stratagems to add uniqueness to your army play style. Relics, Warlord Traits, tactical objectives, and psychic powers will also be included. Another new addition to the codexes will be rules that represent specific sub-groups of major factions. New are the the previously unexplored things like Necron Dynasties and Adeptus Mechanicus forge worlds.

Here is what Games Workshop had to say about the new codexes. 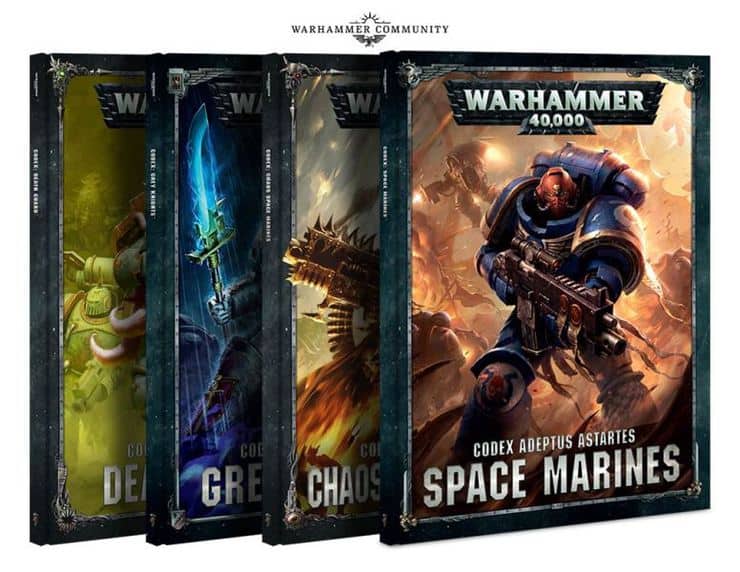 Codexes?
Didn’t you hear? New codexes are coming soon! If you’ve been familiar with Warhammer 40,000 for a while, the concept will be familiar to you, but for those of you just joining us, a codex is a book dedicated to a specific faction within Warhammer 40,000 – the definitive guide to that army.

What’s in a codex?
Each codex is a dedicated book about a single faction from the Warhammer 40,000 setting and game. They contain a wealth of inspirational background, artwork, heraldry and miniatures photography for that army, and because that faction is the sole focus of the book, they also contain far more detailed army-specific rules than we could hope to cover in the index books.

What’s the difference between a codex and an index book?
The indexes let you play with your Warhammer 40,000 army until the codex for your faction is released. The idea being that the rules for units in codexes eventually supersede the rules for them presented in the index books.

Is my index invalid now?
Not at all. Even with the pace we’re planning on releases these new codexes, it’s going to take well over a year to get to all of them. No single codex will cover all the contents of an index book, so you’ll get plenty of use out of all your indexes, don’t worry.

I just bought Index: Imperium 1 – what should I do with it?
You’ll want to keep hold of your index. Codex: Space Marines doesn’t include rules for playing with Blood Angels, Dark Angels, Space Wolves, Deathwatch or Grey Knights armies, so you’ll still need Index: Imperium 1 to play with those. You’ll also need it for using some of the more unusual models such as the 30th Anniversary Space Marine, the Legion of the Damned and the Terminus Ultra Land Raider.

What are the first of these new codexes?
We’re kicking off with Space Marines. Then soon after, we’ll have Chaos Space Marines, Grey Knights and Death Guard…

If I have a Blood Angels, Dark Angels or Space Wolves army, will I need to buy Codex: Space Marines to use my army?
You don’t have to. Other Space Marines factions not covered in the new codex will continue to use all the datasheets, rules and points values in the index until their own codex is released. Rules for new models not covered in the index (like the upcoming Redemptor Dreadnought) will be available in the box with the model and matched play points for these units will be made available online.

How long do I have to wait? I want them now!
Not long! Codex: Space Marines lands in July, and then before Christmas, we’re aiming to have around 10 codexes available for you to choose from.

As well as classic and well-known armies, you can expect to see factions that have never had their own codex before – starting with the Death Guard, available later in the year.

Wait, did you say Death Guard?
We did. The Plague Legions of Nurgle are getting their own book to represent the fact that their way of war is substantially different from that of most Traitor Legions, as is the range of miniatures you can choose to use in your Death Guard army.

Is every army getting new models too?
Some of them. Certain armies will get new miniatures alongside their new codex, and others won’t. Don’t worry though, our miniatures designers are working hard and we’ll get to all of you eventually – we’re well aware you all want new models for your chosen army.

There are a few options that are missing in the codex that appear in the index: why is that? Does that mean I can’t use these models in my army anymore?
While the indexes are designed to cover a long history of miniatures, the codexes are designed to give you rules for the current Warhammer 40,000 range. There are a few options in the indexes for some Characters and vehicles that are no longer represented in the Citadel range – certain Dreadnought weapons that don’t come in the box, or some characters on bikes, for example.
Don’t worry though, you can still use all of these in your games if you have these older models. In these instances, use the datasheet from the index, and the most recent points published for that model and its weapons (currently, also in the index).
They still gain all the army wide-bonuses for things like Chapter Tactics and can use Space Marines Stratagems and the like, so such venerable heroes still fit right in with the rest of your army.

What’s in the codex that’s not in the index?
Good question.

Codexes, of course, allow us to focus on a faction in more detail than we could ever hope to in an index book. Alongside new expanded and updated background, you’ll find a wealth of rules content: army specific Stratagems, Relics, Warlord Traits, Tactical Objectives, psychic powers and more besides. We’ve listened carefully to what you liked in your codexes in the last edition of Warhammer 40,000, and what you wanted to see this time round, and we’re pretty confident we got it all in. 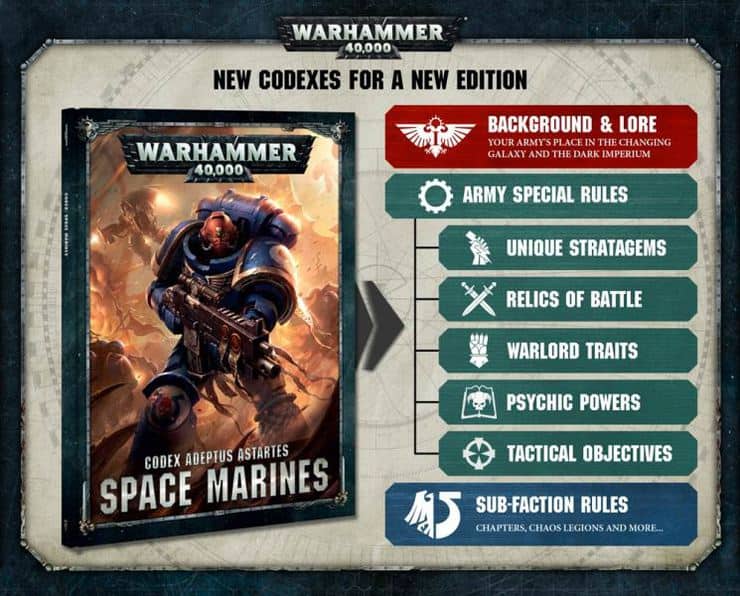 Are the points changing?
Yes, some units’ points for matched play games will change. This sometimes represents feedback from you guys playing games out there in the world, more playtesting, or sometimes because the unit now has new abilities or synergizes differently with new units and abilities in the codex.

What format will the new codexes be in?
These codexes will be available in a hardback format to match your new Warhammer 40,000 book.

Will they cover units from Forge World?
They won’t, but there will be other books on the way from Forge World that will cover those units, in a similar style to their previous Imperial Armour books.

Can I choose to use the rules and/or points for units from my index instead of the new ones in the codex once released?
In your own games, if you and your opponent agree, you can, of course, play with whatever rules you like.

Where can I send feedback/questions about index books or codexes?
Feedback from you guys out in the gaming world helped shape the new edition into the best Warhammer 40,000 ever, and we’re committed to continue improving the game, even now.

If you have any thoughts, questions or feedback on any of our books, let us know on the Warhammer 40,000 Facebook page.

Will there be limited editions for the new codexes?
There will be a range of format options for all codexes, both for gamers, who just want a copy of every book, and for diehard fans of that army who want a collector’s edition of their chosen faction’s codex.

When can I use the new codexes in stores, events or tournaments?
As always for this type of thing, check with your store or event organiser.

There you have it!

Ten new codex books by Christmas, with the Space Marines codex by the end of the month followed by Chaos Marines, your Indexes will still be useful, point cost changes, and so much more.

For more on the Codex books and all things Warhammer 40k: 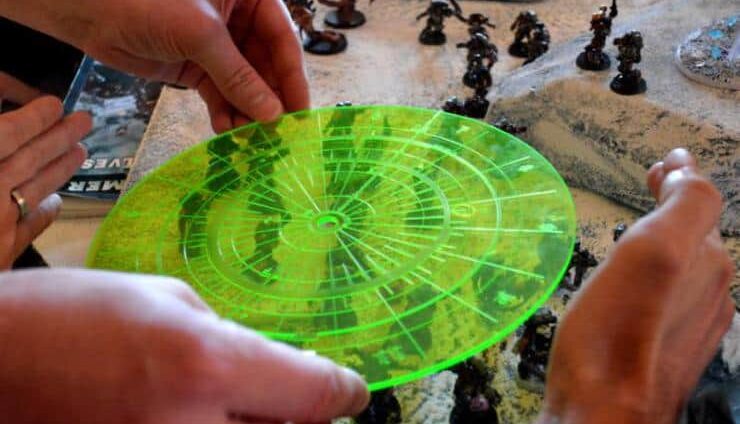 NEXT ARTICLE
Templates & Scatters: Why 8th Ed 40k Didn’t “Fix” Them? »
If you buy something from a link on our site, we may earn a commision. See our ethics statement.