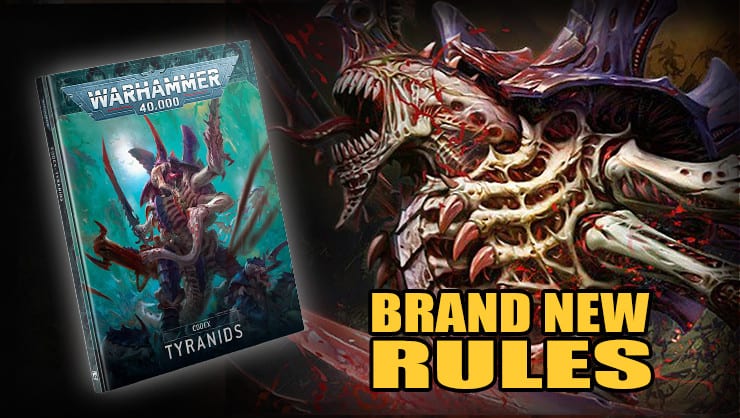 Here are all the new Tyranids 40k Codex rules for what the different Hive Fleet keywords will do for your army in 9th Edition! 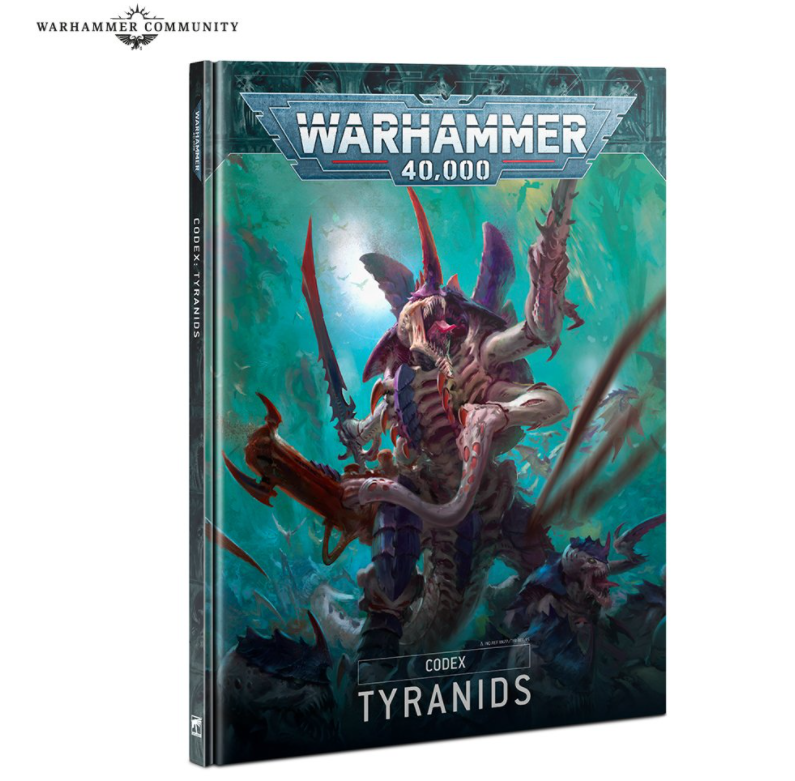 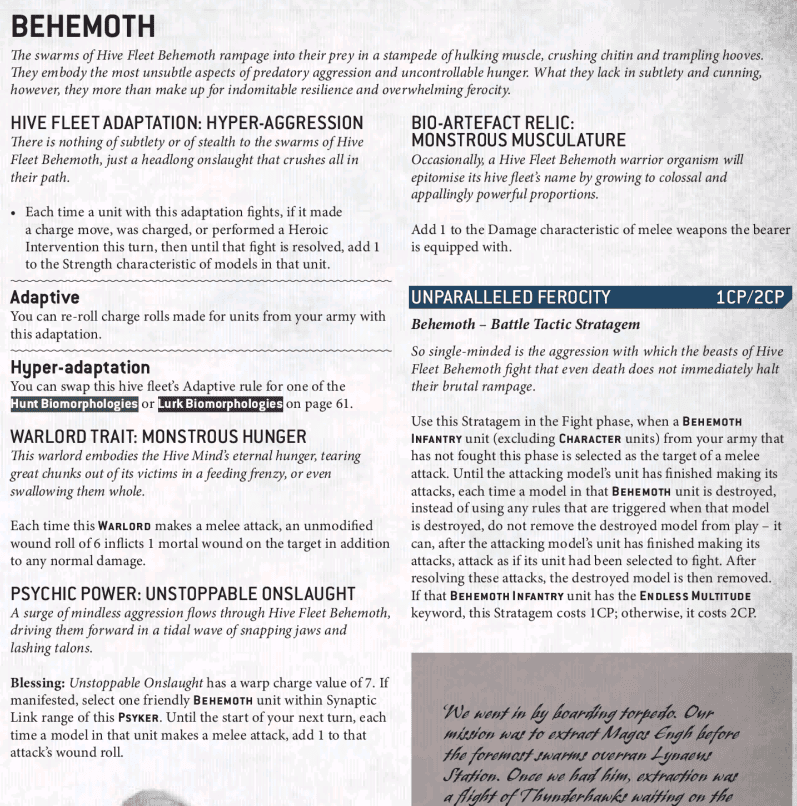 Adding 1 to the Strength of all units that charged is quite strong, meaning your army will always hit hard in the first round of combat! Next, re-rolling all charges in a melee-centric army is also preferred. The Psychic Power is solid as well, you’ll be getting that +1 Strength and re-rolling all wound rolls.

Lastly, attacking one last time for a couple of CP can be insanely good if done with the right unit! 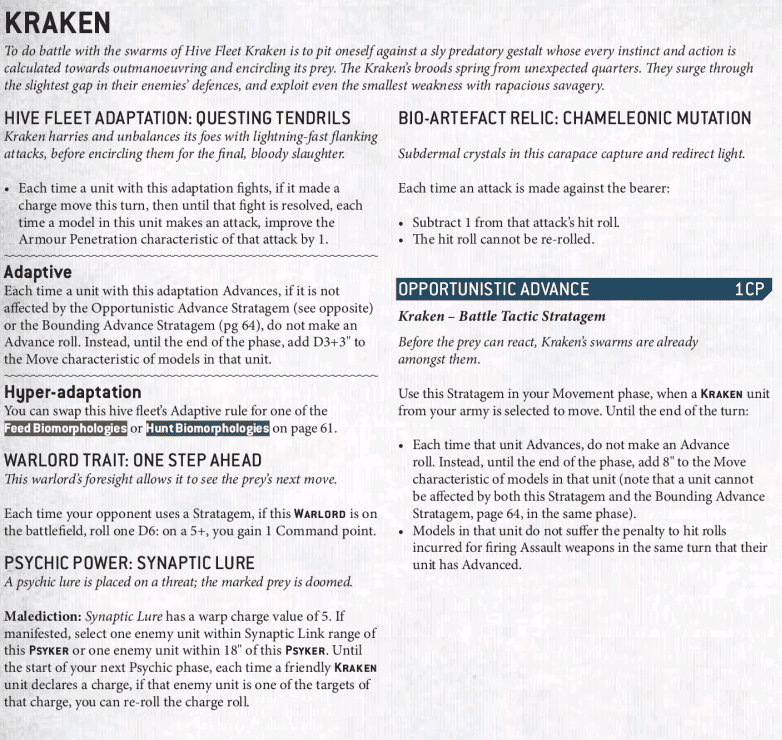 Improving the AP by one can be super strong if you’re attacking with huge units, as it will make their attacks actually cut through armor. Next, regaining CP on a 5+ can be really good, but isn’t anything too crazy from what else we’ve seen in the book and 9th edition in general. 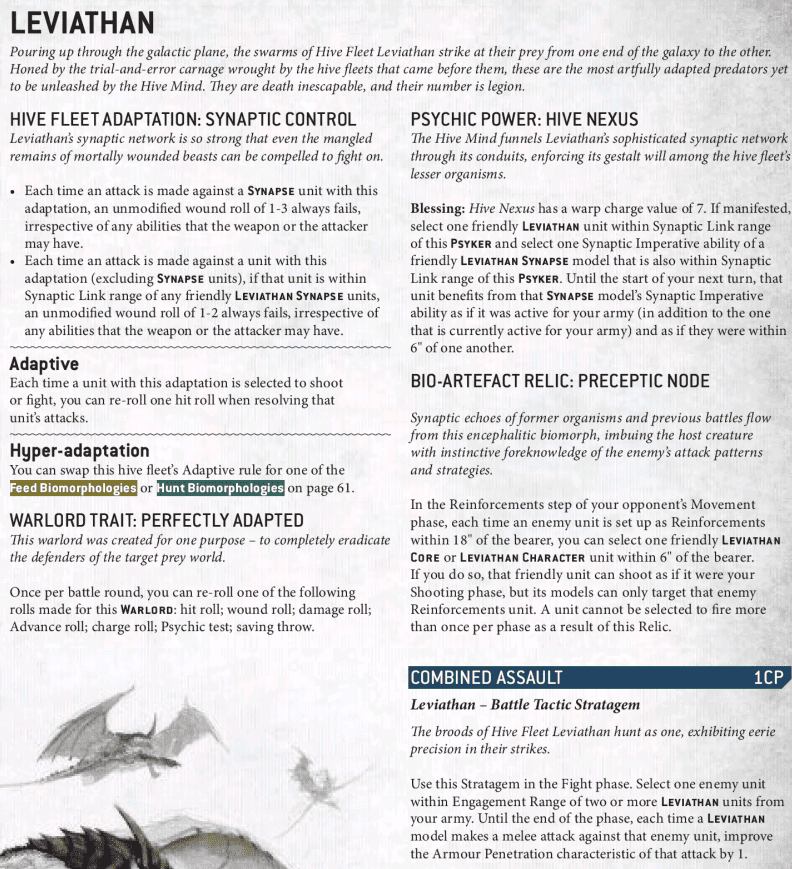 This will make your Synapse units have free Transhuman, meaning rolls of 1-3 always fail! Then, it will give your smaller units in range a mini version of it with no wounds on a 1-2. Next, a free re-roll is always nice, but it is just on hit rolls.

Being able to have one unit taking advantage of a different Synaptic Imperative can be super strong and take your opponent by surprise! For 1CP, increasing all your AP by one is just awesome when you need it too! 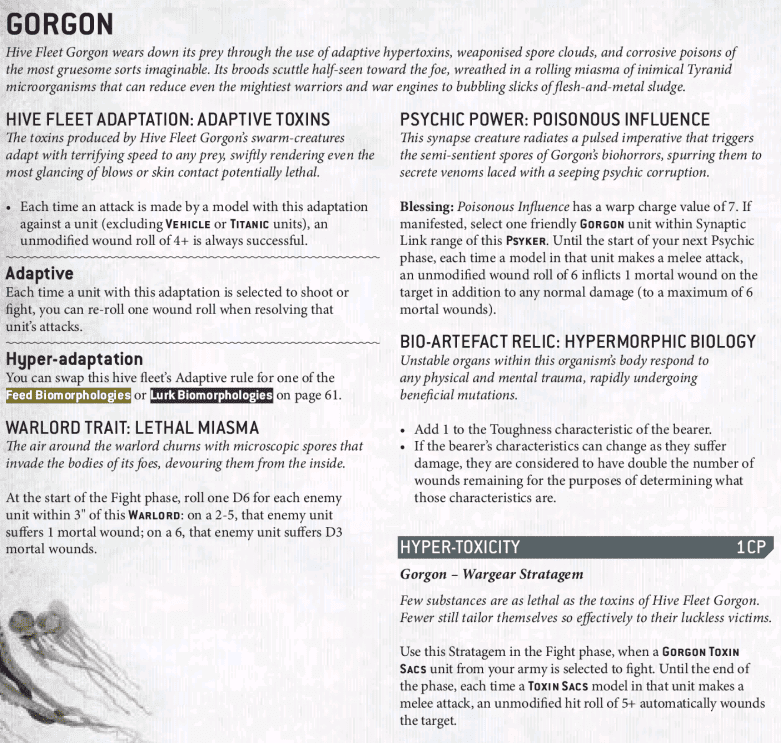 Adaptive Toxins may not be the craziest thing, but if you have a ton of weaker units against a high toughness army, this will come in clutch. Then, re-rolling a wound roll is just always strong for free. The Warlord Trait might not be the best thing ever, but if you can get in combat with 2 or 3 units, you can start racking up the wounds.

The Psychic Power can also be super strong for bigger units, as you’re bound to roll plenty of 6’s with all those attacks! 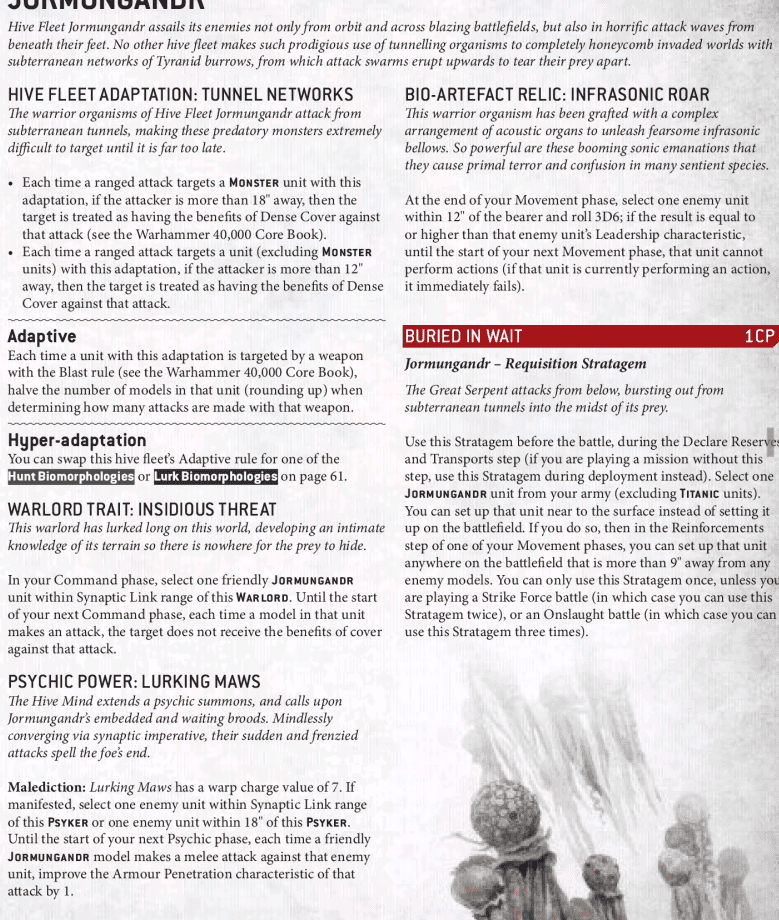 Getting Dense Cover for all your units is pretty sweet, especially against an army that wants to shoot you from afar, this will be super helpful- just ask the Raven Guard.

Tyranids have a lot centered around extra AP as this is another power based on that. Next, stopping actions is always really strong and really annoying! Buried in Wait is nice to put one big unit in the ground, meaning they can then ambush! 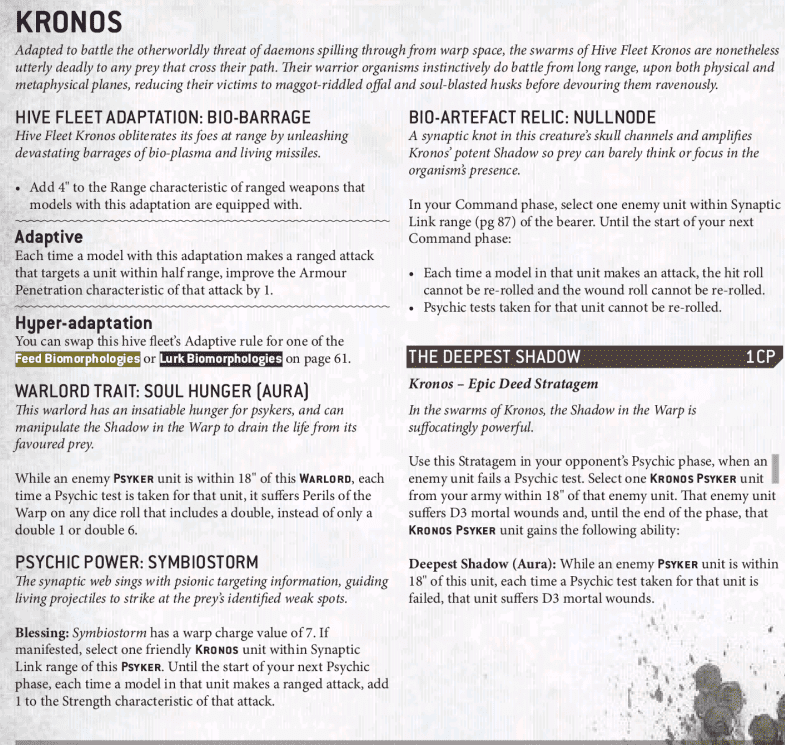 Adding 4″ to the range can be really noteworthy as there are plenty of weapons in the book with short-ranged weapons. Then, this is another one that improves AP by 1 (seeing a pattern yet?). The Warlord Trait is interesting because it makes Perils so much more likely and might force them into re-rolls when they don’t want to.

Then, when combined with the Psychic Power to add one to the Strength, this is looking good. 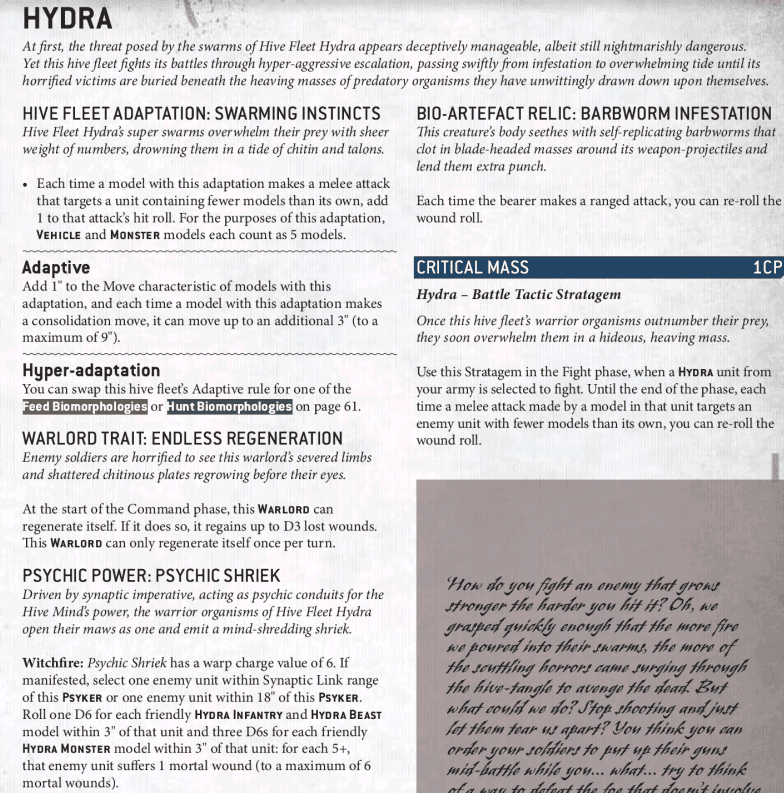 If you have big swarms, you will pretty much always be adding 1 to your hit rolls and that’s just super strong, Plus you can consolidate an additional 3″, so again, quite nice. If you have like 10-15 models within 3″ of one unit, you will really dish out the Mortal Wounds.

For 1CP re-rolling all wounds is honestly insane, especially since you’ll already be getting the +1 to hit.

Either way, exciting times are on the way for Tyranids along with rules and models via all the latest rumors and reveals.  Here’s all the latest on the upcoming rules updates and points changes for Warhammer 40k.

What do you think about all these new Tyranids codex rules (like the Hive Fleet ones) that are out there? 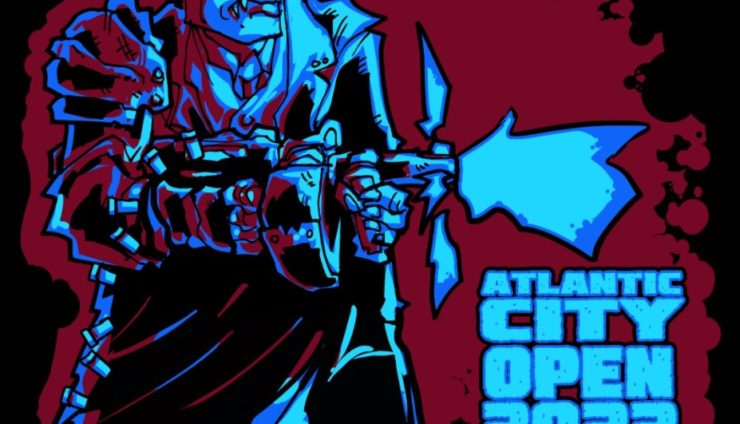 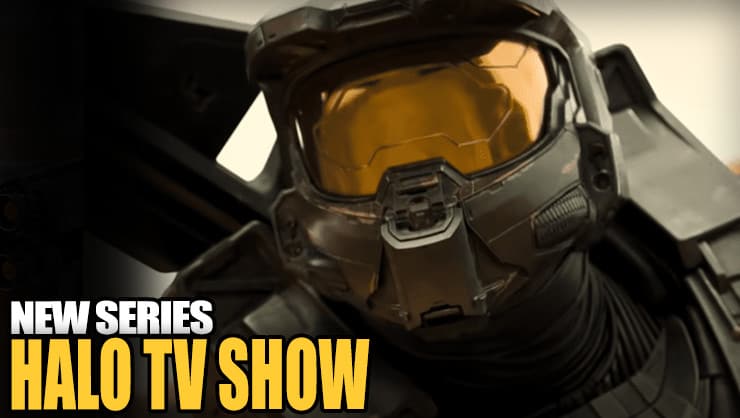 NEXT ARTICLE
New Halo Live-Action Series Trailer & Series Drops Soon! »
If you buy something from a link on our site, we may earn a commision. See our ethics statement.