Warhammer 40k: Who & What the Leagues of Votann Kin are 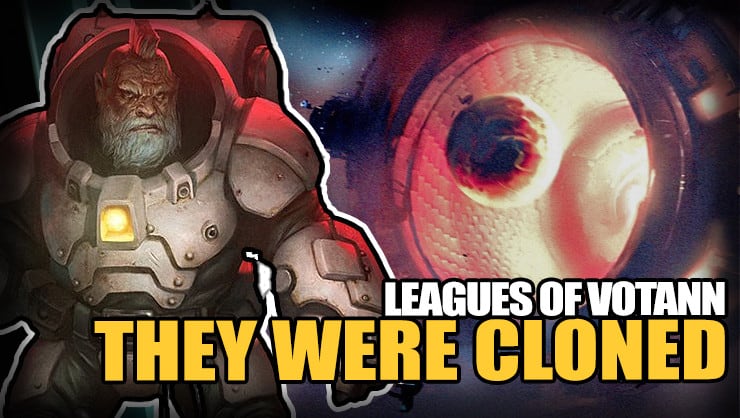 This is the second big lore post we’ve seen from GW, and this time it’s all about clones who and what the Leagues of Votann Kin are!

They really have to build up the lore side of things with a new faction, and we love to see it. From all of this, it looks like GW is trying to push the Leagues away from their more normal human Imperial counterparts.

It is also worth mentioning that Votan (one “n”) is another name for Odin and a few other gods throughout history, so maybe that’s where GW grabbed some of their inspiration(s).

Warhammer Community unveiled the new lore, but we’ll also look at the first portion that we saw recently. 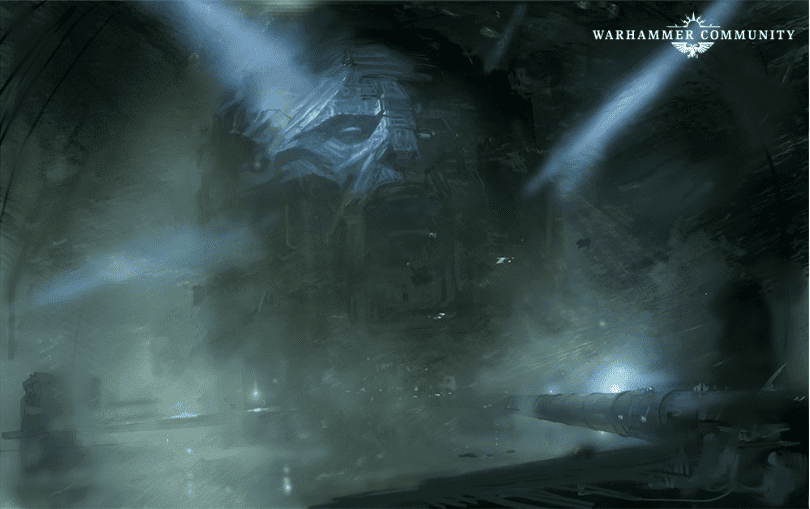 A secretive people in a galaxy full of mortal threats, the Kin do not discuss the nature of the Votann with outsiders – by sacred custom and sensible caution. The word is used freely enough, but no-one beyond the Leagues has any clue what it refers to.

There’s good reason for this reticence – if the secrets of the Votann were ever revealed to the galaxy at large, the uneasy peace between the Leagues and the Imperium of Man would quickly crumble.

Why? The Votann are Ancestor Cores – super-cogitators, gestalt repositories of inherited wisdom and knowledge. Each League has its own Votann, central to its way of life, and no Kin would hesitate to lay down their lives to protect it – these venerable cogitators are as sacred to the Kin as gods are to the more spiritual races. That’s the sort of thing the Adeptus Mechanicus has strong opinions on.

This really allows GW to lean into new/old weapons that will set them apart from the rest of the armies in 40k. Plus, all this talk of ancient tech also really gives them the opportunity to bring about some really old stuff back into the game.

Also, the Votanns themselves are a really cool idea, supercomputers that just give all the answers. We’re sure they get 42 a lot of the time, but hey, what can you expect? 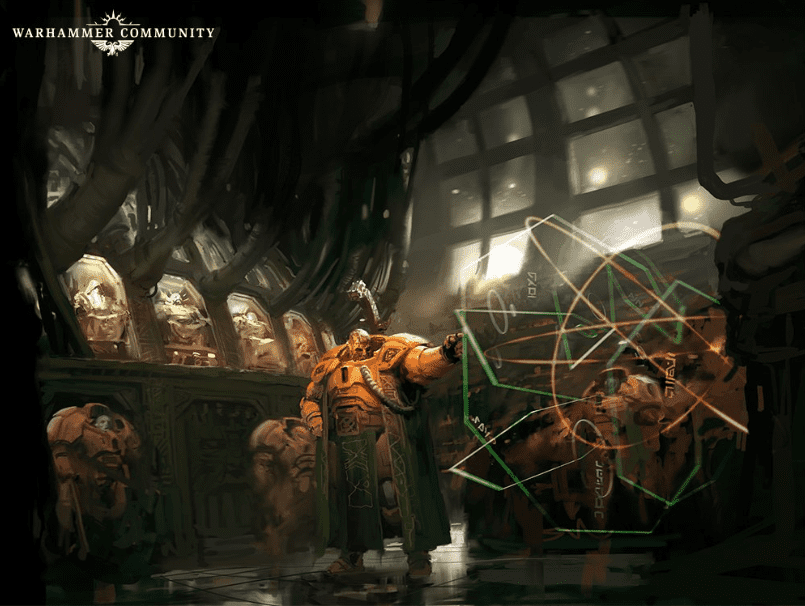 Within these self-organising datastacks and quantum infocores is held all the information a people might need to survive among the stars – weapon specifications, military theory, genealogical data, science, philosophy, and even Standard Template Constructs. There is an unimaginable wealth of lore buried in each Votann, which cannot be allowed to fall into the more superstitious hands of outsiders.

Of course, the 41st Millennium being what it is, not all is well among the Votann – it turns out that even machines of near-limitless power can eventually run out of memory. Whoever first created these marvels did not design them for tens of thousands of years of constant operation, and the sheer weight of data they are forced to compute has begun to slow them down.

Well, it wouldn’t be 40k without tech failing! This would also lead to some really cool scenarios you could play out with them hunting for tech to fix up the machines. They also mention that it can now take decades or centuries for the info to pop out!

Again though, they are really changing them into a proper faction with a backstory all focused around sticking to the old ways, but a need to venture out. Now with all this revealed, we’d not at all be surprised to see them with some super old robots to help them out!

GW Reveals Who & What the Leagues of Votann are Clones! 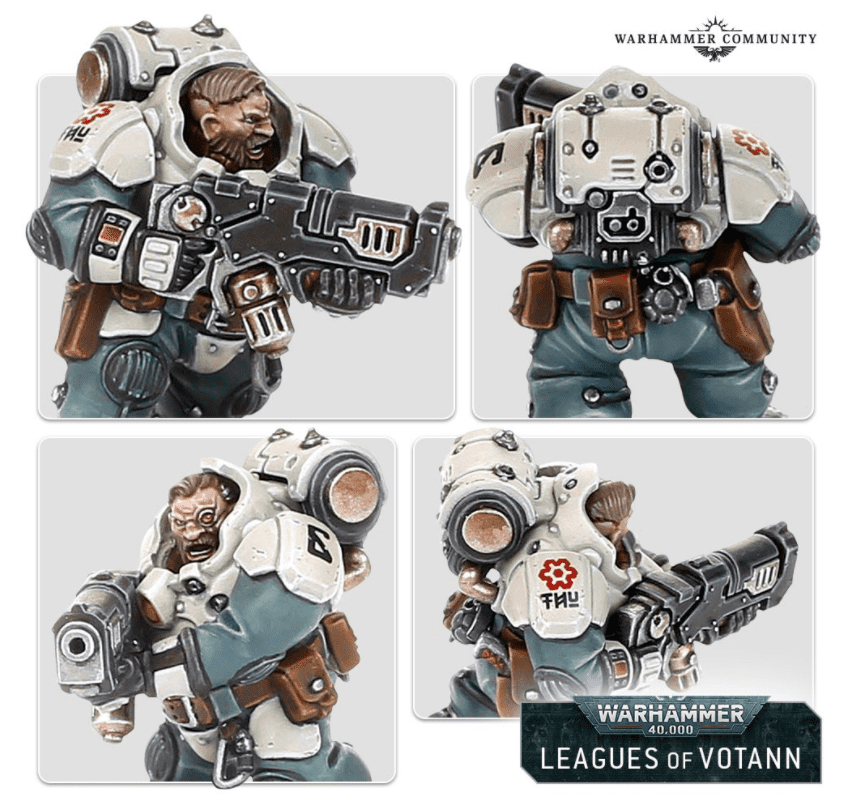 The Kin may not know much about their earliest days, but there are certain articles of lost history deemed indisputable, known as “First Truths”. One such principle is that the First Ancestors departed their original homeworld – almost certainly pre-Imperial Terra – millennia ago, aboard vast fleets of generation ships. It is also deemed to be true that these Ancestors set out as prospectors, miners, and void-dredgers, charged with exploiting the riches of the heavens.

The eventual fate of the First Ancestors is uncertain, for Kin myth solidifies into intelligible history only after the long-march fleets began to arrive at their destinations near the galactic core. The records of this period boast the last references to the First Ancestors – and the earliest mentions of the Ancestor Cores.

This makes sense with the new Necromunda Divergent Ironhead Squats Prospectors minis we just saw, as they are some of the only dedicated miners left out there.

Likewise, it is a First Truth that the Kin have been a cloned people from the very start.

The First Ancestors are held responsible for the cloneskeins – the systems of stable mutations that underpin the entire genetic structure of the Kin to this day. The gene pool drawn upon by the Leagues of Votann is stable, deep, and varied – this is no race of identical clones. In practical terms, the cloneskeins have produced a species with denser bones and muscles than baseline humans, higher red and white blood cell counts, and formidable strength and resilience.

It’s quite interesting to think that the Leagues of Votann are all clones of some sort, but not from the same source, from all the different first ancestors out there. 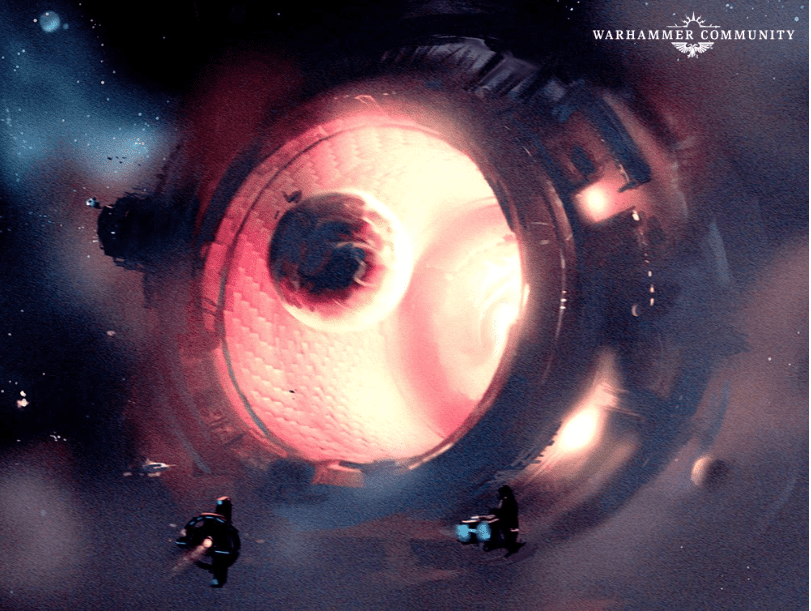 Such was the craft of the First Ancestors that even Kin souls are engineered – they shine more dimly against the tides of the warp than their distant human cousins, with no evidence of uncontrolled psychic mutation. Indeed, only those with the appropriate psychically active cloneskein can activate the so-called barrier-tech the Kin employ to access the empyrean.

Cloneskeins differentiate the division of labour in Kin society, and impart useful abilities on those who possess them. Some Kin might have enhanced reaction times, the ability to see the infrared spectrum, or limited resistance to cosmic radiation and extremes of temperature or gravity. Many cloneskeins manifest in visible fashion, with giveaways including distinctive bodily odours, unusual eye colours, or thick subdermal layers. Such physical variations would be a cause for concern in Imperial society – but to the Kin, they are a badge of honour.

It would make sense then that your heroes and characters could actually be bigger as that could be a mutation, or with this, it opens the possibility for some very interesting special rules! 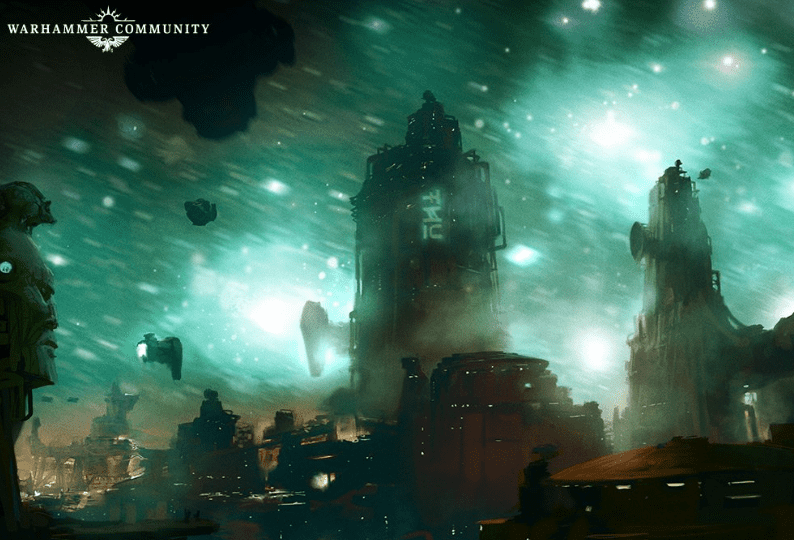 Most Kindreds have some means of defending themselves, and some are mighty battleforces in their own rights – but they tend to unite for protection under the banner of a League. These formal affiliations allow Kindreds to share the benefits of trade, military support, and so on. Leagues like the Ymyr Conglomerate are massive and ancient power blocs, but others have waned in power, or only risen to prominence in more recent times – such as the Seran-Tok Mercantile Leagues, who have profited greatly from trade with the T’au Empire.

This is the 3rd time they have mentioned a connection with Tau, so we expect them somehow to be able to ally, which would be pretty cool to see! Plus, they also talked about how you could take a small detachment in other armies, and it looks like Tau is one of them. 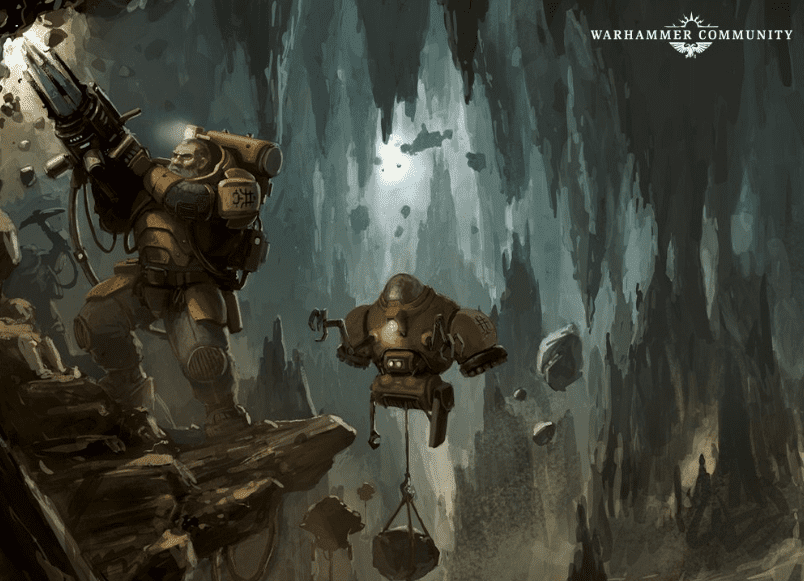 But what of the Guilds? These groups exist outside the bounds of Kindred or League, uniting all who practice a particular trade within a given region of Kin space. Whether you make a living by salvaging broken void craft or concocting nutritious liquid rations, there’s a Guild for you – setting standards, providing accreditation, and demanding tithes. Guild membership is voluntary – but there’s no love lost between Guildkin and freelancers, who regard each other as disreputable and hidebound, respectively.

competition – in practice, smaller Guilds rarely extend beyond a single Hold, and maintain key positions within their ruling bodies. Guildmasters typically sit on the Hearthspake – a Kindred’s governing council – as civilian representatives, alongside the military commanders of the Kinhosts and the Grimnyr.

Competition between Guilds can become heated, even drawing other species into the crossfire as jockeying Guildmasters sponsor Oathband expeditions to survey systems rich in resources. Anyone who happens to already inhabit these hotly-contested worlds are out of luck – existing civilisations and ecosystems are a much lower priority than beating rivals to the punch. 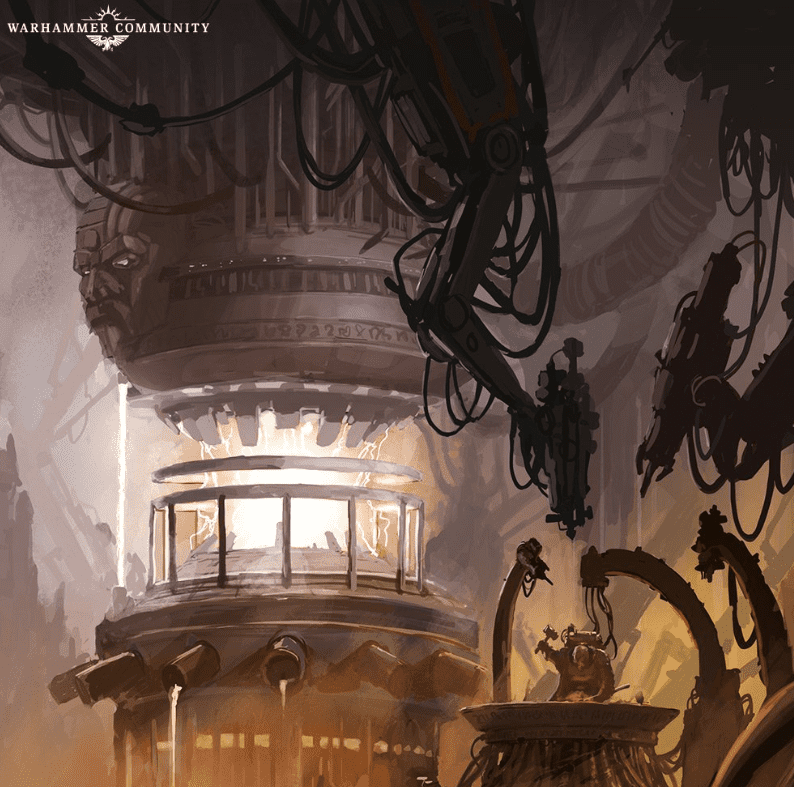 Despite their fractious natures, Guilds are invaluable to Kin society – their accumulated know-how and contacts are what smoothes trade and transit between disparate Kindreds, providing a web of organisation and support that runs throughout the Leagues. From star-mining and gravitic fracking to constructing the far-flung Holds that the Kin call home, every venture is marked by the high standards – and relentless competition – of the Guilds.

The Cthonian Mining Guilds are particularly powerful, embodying the belligerent acquisitiveness of the Kin. Fearless in the cause of locating, securing, and harvesting resources for their race, the Cthonians think nothing of braving environments so extreme that even other Kin would baulk at their hazards. You can expect to hear more about this particular Guild – and its much-modified members – soon enough.

It’s always cool to see more about the background, and it very easily seems like this is how they might break down the armies into different bonuses and such.

Are you excited about the return of Squats er the Leagues of Votann? Will you be picking some of them up when they drop? 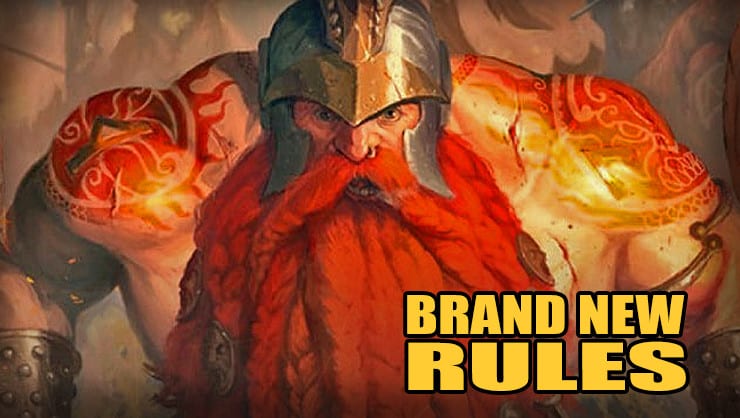 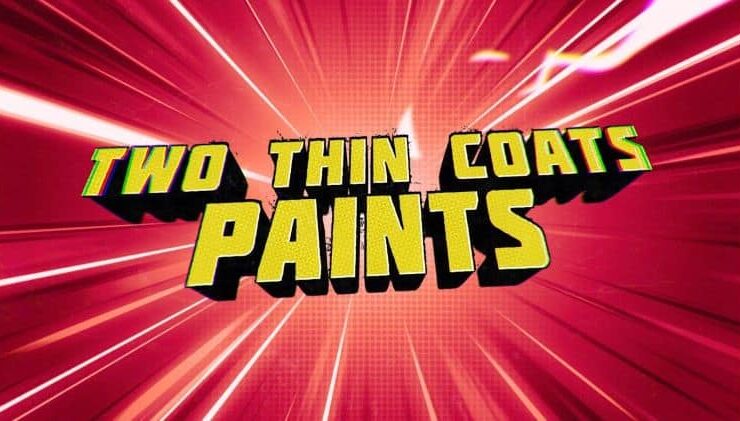 NEXT ARTICLE
Full Line of Duncan Rhode’s Two Thin Coats Paints »
If you buy something from a link on our site, we may earn a commision. See our ethics statement.